Park became only the second LPGA rookie ever to win the money title, the Rookie of the Year and the Player of the Year honors in one season, joining Nancy Lopez, who achieved the same in 1978.

Park clinched the points race for the top rookie award in October, with five tournaments remaining in the season, thanks to her victories at the U.S. Women's Open and the Canadian Pacific Women's Open.

Then Park secured the money title by finishing tied for sixth at the season-ending CME Group Tour Championship last month. She closed with US$2,335,883, making the 24-year-old the only LPGA player to earn more than $2 million this year. 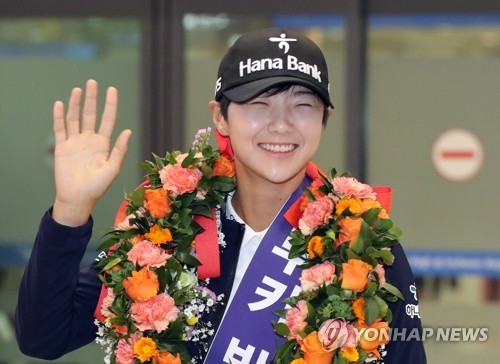 And with some late drama, Park ended up sharing the Player of the Year honors with fellow South Korean Ryu So-yeon.

Park entered the final tournament of the year five points behind Ryu in third place in the points race. Players are awarded points for top-10 finishes: 30 for first, 12 for second, nine for third, seven for fourth, six for fifth and five for sixth, and so forth. And by tying for sixth place, Park earned five points to pull into a tie with Ryu, who failed to add to her total by placing in 30th place.

Lexi Thompson had a chance to beat both South Koreans for the award by winning the Tour Championship, but she missed a short par putt at the 72nd hole to blow a chance to at least get into a playoff. Thompson ended up one shot behind the eventual winner, Ariya Jutanugarn.

Park even climbed to No. 1 in the world rankings briefly in November, becoming the first rookie to reach that plateau. Her reign lasted only one week, as Feng Shanshan of China overtook her on the strength of two consecutive wins. Park is currently No. 2 behind Feng.

Park also had a chance to win the Vare Trophy as the tour's scoring champion this year but ended up in a close second behind Thompson. The American had the lowest scoring average at 69.114, with Park finishing at 69.247.

Despite these outstanding accomplishments, Park said she remains very much a work in progress.

"I'd give myself 75 points (out of 100) for this season," she told reporters at Incheon International Airport. "The other 25 points ... It's difficult to talk about that because there's just so much room for improvement."

Of her three major awards, Park said the Player of the Year came as the biggest surprise.

"It was a whirlwind of a season, and I was fortunate to win the Player of the Year award," she said. "I only clinched it at the very last minute, and the feeling is hard to describe." 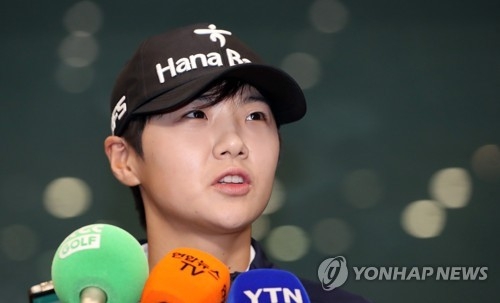 Park dominated the Korea LPGA (KLPGA) Tour before taking her talent to the United States. In 2016, Park won a tour-best seven times and set a single-season record with more than 1.3 billion won ($1.2 million) in earnings.

Park also made seven LPGA starts as a nonmember in 2016 and posted four top-10 finishes, three of them at major championships. Park earned about $682,000, which would have been good enough to place her 22nd on the 2016 money list.

Nonmembers can join the LPGA Tour full-time the following year by winning a tournament or by making enough money to rank inside the top 40 at the season's end. Park is the first South Korean to join the LPGA Tour by taking the latter route.