SEOUL, Dec. 4 (Yonhap) -- A series of aftershocks following last month's earthquake in the southeastern city of Pohang has resulted in soil in the area moving about 28 centimeters laterally, but the movement isn't likely to lead to landslides, government data showed Monday.

A soil movement sensor installed on a hill near the quake's epicenter gave a reading of 363 millimeters following aftershocks measuring magnitudes of 2.0 and 2.4, respectively, on Nov. 21, according to the Korea Forest Service data released by Rep. Hwang Ju-hong of the minor opposition People's Party.

That contrasts with a reading of 79.1 mm, meaning that soil in the area moved about 28.4 centimeters. 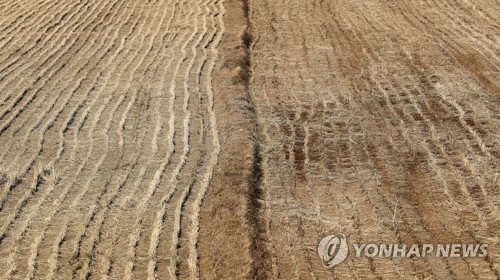 The main 5.4 magnitude quake struck Pohang on Nov. 15, and a string of aftershocks have since followed. That tremor caused soil to move 6.5 cm, but it later returned nearly to its original state.

The forest service said the latest movement isn't serious enough to cause landslides.

"Every time aftershocks happen, the land in this region widens and narrows repeatedly, but we don't see any risk of landslides or collapses," a forest service official said. "We're going to greatly increase the number of (soil movement) sensors and establish an alarm system."

Hwang said he's going to work with other parties to set aside some 13 billion won (US$11.9 million) for projects aimed at preventing landslides caused by soil movement.
(END)