SEOUL, Dec. 4 (Yonhap) -- Prosecutors will call in a former top aide to former President Lee Myung-bak for questioning on Tuesday over allegations that the military's cyberwarfare command attempted to interfere with the 2012 presidential election, officials said.

Kim Tae-hyo, a Sungkyunkwan University professor who served as a senior secretary to Lee, is suspected of involvement with the cybercommand's operations to write Internet comments to sway public opinion in favor of then ruling party candidate Park Geun-hye.

Park ultimately won the election against her opposition Moon Jae-in, though she was removed from office earlier this year due to a massive corruption scandal involving one of her longtime friends. Moon succeeded her after winning the presidential election in May.

Kim has been asked to appear at the Seoul Central District Prosecutors' Office by 10:30 a.m. as a suspect, officials said. 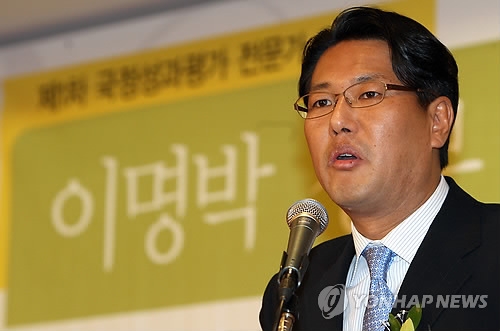 Last week, investigators raided Kim's home and office, and seized documents and computer files related to his duties as a presidential secretary.

The investigation, however, has recently suffered a setback from a court decision to release the former national security adviser, Kim Kwan-jin, and former Deputy Defense Minister Lim Kwan-bin, who had been arrested on charges of involvement in the cyberoperations.