SEOUL, Dec. 4 (Yonhap) -- A former senior secretary to President Moon Jae-in flatly rejected bribery suspicions against him Monday as he appeared at a local prosecutors' office for questioning for the second time in less than two weeks.

"This has nothing to do with me and I know nothing about this," Jun Byung-hun, former senior presidential secretary for political affairs, told reporters after arriving at the Seoul Central District Prosecutors' Office for questioning. 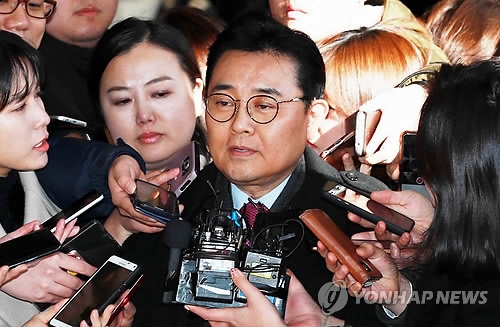 Jun is accused of forcing Lotte Homeshopping, a local home shopping channel, to donate 330 million won (US$303,700) in 2015 to the Korea e-Sports Association, of which he was then the chief.

Prosecutors are also looking into suspicions that Jun forced another home shopping channel, GS Home Shopping, to make a donation. The company donated 150 million won to the Korea e-Sports Association in 2013.

Jun has denied the charges against him.

Last week, prosecutors sought a court warrant to formally arrest Jun, but the court rejected the request, saying that the charges against him are disputable and that he has a low risk of fleeing or destroying evidence.

After Monday's questioning, prosecutors plan to determine whether to seek an arrest warrant for him again.
(END)

Ex-aide to Moon appears for questioning over bribery suspicions

Ex-aide to Moon appears for questioning over bribery suspicions