SEJONG, Dec. 5 (Yonhap) -- South Korean babies born in 2016 are expected to live more than 82 years as the risk of death has been diminished by medical advances and other developments, a government report showed Tuesday.

The life expectancy at birth averaged 82.4 years in 2016, slightly up from the previous year's 82.1 years, according to the report by Statistics Korea.

Baby boys and girls were expected to live 79.3 years and 85.4 years, respectively, last year, with the male-female difference narrowing 0.1 year to 6.1 years.

The gender gap in life expectancy has been on a steady decline since 1985, when it peaked at 8.6 years.

A baby boy born last year has a 57.9 percent chance of reaching 80, while the chances of a baby girl becoming an octogenarian stood at 78.4 percent.

If the death risk from cancer is excluded, the life expectancies for male and female babies increase by 4.9 years and 2.9 years, respectively, the report said.

In comparison with the 35 member countries of the Organization for Economic Cooperation and Development (OECD), South Korea's life expectancies for male and female babies are 1.4 years and 2.3 years longer than the OECD average, respectively. 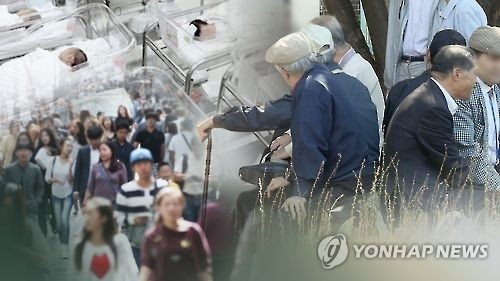