SEOUL, Dec. 4 (Yonhap) -- The ruling and opposition parties reached a tentative deal Monday in negotiations over the government's budget for next year, although some key sticking points -- such as creating more public service jobs -- remain, as the main opposition party has deferred its decision on them for another day.

The floor leaders of the ruling Democratic Party, the main opposition Liberty Korea Party (LKP) and minor opposition People's Party announced the agreement, two days after the parties missed the legal deadline for budget's passage over key contentious issues in the 429 trillion won (US$395 billion) budget.

Major bones of contention in the original budget bill were a proposal to use 534.9 billion won to support Moon's push to create 174,000 new public service jobs by 2022 and the 3 trillion won "job stability" plan to bankroll next year's minimum wage increase.

Opposition parties sought to reduce the number of public sector jobs to be created, arguing that such a sharp increase would put too much burden on future generations. They also demanded the job stability plan be applied for only one year.

The parties have wrangled over the budget bill since early last month, as the parliament's review committee on fiscal spending kicked off in earnest. As the negotiations made little progress, the parties set up a separate negotiation table consisting of top two officials from each party to speed up the process to meet the original Nov. 30 deadline.

But they failed to reduce their differences on creating public sector jobs and the corporate tax rise, among other things, even by the extended Dec. 2 deadline.

Following Monday's deal, the main opposition made it clear that it still does not agree on the two provisions.

"We stated (in the tentative deal) that we put off our decision, as we do not agree on the increases of the corporate tax and number of public officials," Chung Woo-taik, floor leader of the LKP told a press briefing.

Other LKP members expressed strong opposition to the tentative budget agreement in a general meeting held after the announcement. Chung said later his party will convene another meeting early Tuesday before the vote to finalize its decision on the two proposals.

The parliament is scheduled to hold a plenary session 11 a.m. Tuesday to put the revised budget bill to a vote.

They all agreed to set the state subsidy for smaller businesses against the burden of the planned minimum wage hike at 2.97 trillion won for next year, with the amount for the 2019 subsidy not to exceed the previous year's expenditure.

The subsidy for the minimum wage hike comes as the Moon government decided to provide financial support to make up for the costs of a sharp rise of the legal minimum hourly rate, which is increasing 16.4 percent to 7,485 won.

The proposed rise in basic pension to 250,000 won and provision of children's allowance of 100,000 won per household will come into effect starting next year in line with the government's plan, with the time of implementation and the scope of the beneficiaries to be slightly adjusted in the opposition parties' favor. 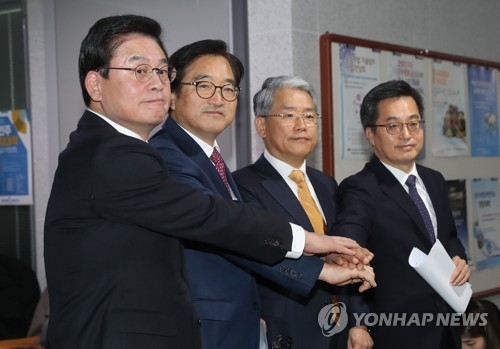