INCHEON, Dec. 4 (Yonhap) -- Any way you cut it, South Korean phenomenon Park Sung-hyun enjoyed a monumental rookie season on the LPGA Tour in 2017.

On the strength of two wins, Park was the runaway winner of the Rookie of the Year honors, and added the Player of the Year and the tour's money title, too. She was the only LPGA player to earn more than US$2 million this year, and she became the first rookie to reach No. 1 in the world rankings in November.

What does she have for an encore in her sophomore campaign? For one, Park said she'd like to win more tournaments in 2018 than she did in 2017.

"This year, my goal was to win a tournament and the top rookie award," Park told reporters after arriving at Incheon International Airport on Monday. "I ended up winning twice this year, and I'll try to win three tournaments next year."

Park is only the second rookie, after Hall of Famer Nancy Lopez in 1978, to sweep up the money title, the Rookie of the Year and the Player of the Year honors in the same season. 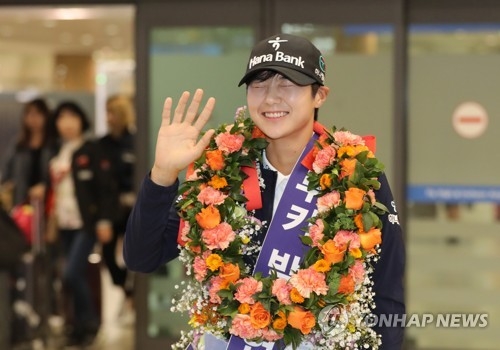 Asked how she will remember the year 2017 in the future, Park said, "I will think of it as a great year. I accomplished everything I'd set out to as a rookie. Even after a long time, I will remember this year fondly."

Still, the 24-year-old said she does have plenty of room for improvement, and gave herself a score of 75 out of 100 for her rookie year.

In particular, Park said she needs to be a better wind player.

"I feel like my shots have high trajectories," Park said. "So I'll try to practice a lot on windy days this winter and try to improve in that area. I feel good about my ball striking overall, and so it's more important to maintain my feel than try to fix my swing. It's not as though I can't strike the ball well on windy days anyway."

Park also said she missed a few chances to win this year and she needs to be better at handling difficult situations that may emerge over the course of a round.

Park would have joined Lopez in even more rarefied air had she won the Vare Trophy as the scoring champion. Lexi Thompson claimed that award with an average of 69.114, while Park finished with 69.247. Lopez remains the only rookie to have won the scoring and the money titles along with the top rookie and best player awards in one year. 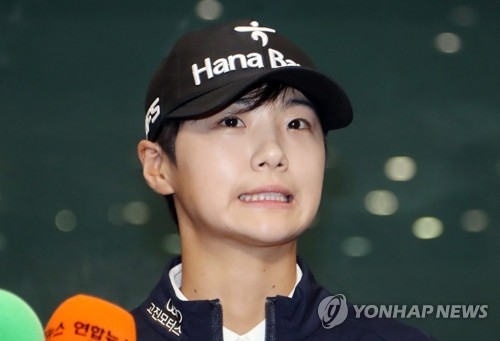 "I was in a position to win it and it was disappointing not to get it," she said. "But I think I'll have my share of chances to take it in the future."

She became world No. 1 in early November, but her reign lasted only one week. She said she was "embarrassed" about being world No. 1 for only one week but added, "I was still so proud of myself in that moment. It may have been for one week, but I was No. 1 in the world."

Park said she traveled through Japan and Saipan with her older sister after the end of the season before coming home. She plans to spend about 15 days in South Korea before flying back to the United States to begin her offseason training.

Park hasn't settled on her 2018 schedule, though she said she may skip the season-opener in the Bahamas and join the circuit in Asia.