SEOUL, Dec. 5 (Yonhap) -- South Korea will try to win a regional women's football title for the first time in 12 years when they compete in Japan later this week.

The competition for the men's side, meanwhile, will be staged in Tokyo from Saturday to Dec. 16.

The women's edition of the E-1 Football Championship, formerly called the East Asian Cup, began in 2005. South Korea were the inaugural champions, but Japan won back-to-back titles in 2008 and 2010, and then North Korea claimed consecutive titles in 2013 and 2015. 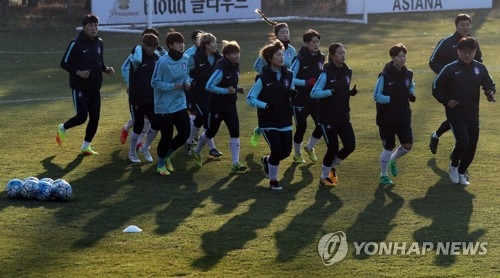 Yoon coached South Korea to third place at this tournament in 2013 and then to second place in 2015. He will try to see the progression to first place this year, although the task will not be an easy one.

South Korea are the lowest-ranked nation in the tournament at No. 15. Japan, 2011 FIFA Women's World Cup champions, are No. 8 in the latest rankings, followed by North Korea at No. 10 and China at No. 13.

The Taeguk Ladies also have losing records against all three opponents. They're 4-9-14 (wins-draws-losses) against Japan, 4-5-25 against China and 1-3-14 versus North Korea.

Yoon and his 23 players departed for Japan last Wednesday, so that they could adjust to the new environment quickly before entering the tournament. Before flying to Japan, they trained at the National Football Center in Paju, north of Seoul, for two days.

Since the E-1 Football Championship isn't on the official FIFA international calendar, foreign clubs aren't obliged to release their international players. This left Yoon to form his squad without forward Ji So-yun, who is with the English side Chelsea Ladies FC, and midfielder Jeon Ga-eul, who plays for Melbourne Victory in Australia's W-League.

Ji is South Korea's all-time scoring leader with 45 goals in 96 caps, while Jeon has 35 goals in 84 internationals.

Among 23 players, 12 played at the 2015 tournament in China where they finished runners-up. 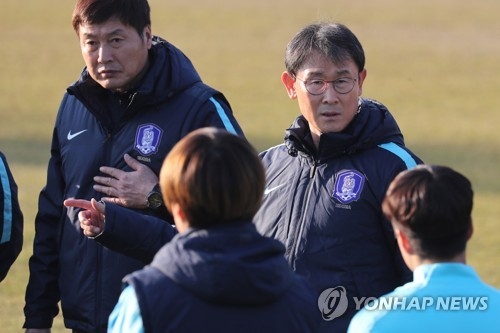 In Japan, South Korea will try to find a way to cope without Ji and Jeon, while allowing young players to gain some international experience.

On offense, South Korea will have to rely on forwards Yoo Young-a, the top scorer on the current squad with 32 goals in 84 matches, and Jung Seol-bin, who has 19 goals in 62 caps.

Team captain Cho So-hyun, who has won 102 caps, is expected to control the midfield with Lee Min-a, who had an impressive season with the domestic Women's K League this season. The 26-year-old had 15 goals and 10 assists in 28 matches to lead Incheon Hyundai Steel Red Angels to their fifth consecutive WK League title.

Experienced players like Lee Eun-mi, Kim Do-yeon, Kim Hye-ri and Lim Seon-joo, who all have played at least 60 matches for South Korea, will likely form the backline. They will be joined by 33-year-old goalkeeper Kim Jung-mi, who has played a record 110 international matches.

Yoon's squad also has three collegiate players, including Korea University forward Son Hwa-yeon, who has two goals in three international appearances, and the tournament will serve as a learning ground for them.

South Korea will open the competition on Dec. 8 against hosts Japan. They will then face North Korea on Dec. 11 and China on Dec. 15. All matches will be played at Fukuda Denshi Arena in Chiba, Japan. 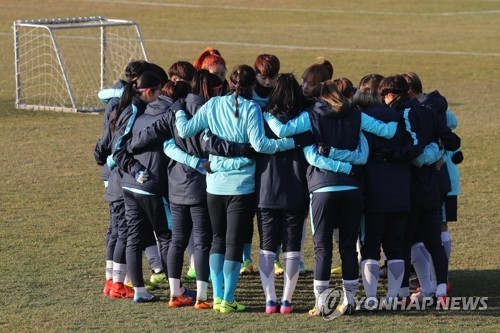 Yoon previously said the match against Japan will be critical to South Korea's championship journey since it can set the tone for the rest of the tournament. The 56-year-old, who has been coaching the women's team since 2013, also is looking to beat arch rivals North Korea this time.

In their most recent showdown against North Korea in April this year, South Korea managed a 1-1 draw during the Asian Football Confederation (AFC) Women's Asian Cup Group B qualifying tournament in Pyongyang. It was South Korea's second straight draw against North Korea, following a string of nine consecutive losses.

South Korea later went on to win the group and earned a spot at next year's AFC Women's Asian Cup in Jordan, which also doubles as a qualifying tournament for the 2019 FIFA Women's World Cup in France.