Jeffrey Feltman, the U.N.'s undersecretary general for political affairs, and his party arrived in the communist nation, the North's official news agency KCNA said in a one-sentence report. There were no more details given.

The U.N. earlier said he will discuss "issues of mutual interest and concern" with North Korean Foreign Minister Ri Yong-ho and others during his four-day trip there.

"The visit is in response to a longstanding invitation from the authorities in Pyongyang for policy dialogue with the U.N.," U.N. spokesman Stephane Dujarric told reporters, according to multiple news reports. "It will be a wide-ranging discussion."

He will meet with North Korean government officials, U.N. officials and the diplomatic corps there as well, the spokesman said.

Feltman's visit comes a week after North Korea test-fired a new intercontinental ballistic missile that it claims is capable of striking anywhere on the U.S. mainland.

The North declared that it has completed its "state nuclear force" with the Hwasong-15 development.

Leaving Beijing on a North Korean Air Koryo passenger jet earlier in the day, Feltman made no comment when asked by reporters for details about his trip. 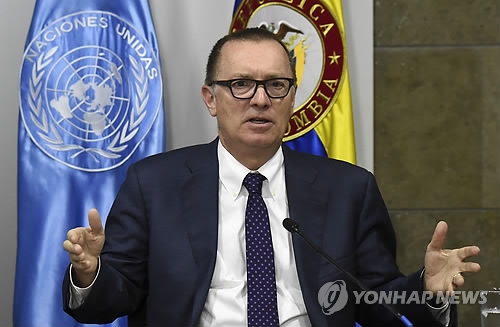 South Korea's foreign ministry welcomed the move, hoping that the trip will help deliver the international community's wish for the North to stop provocations and threats, and take the path toward denuclearization.