SEOUL, Dec. 5 (Yonhap) -- South Korea's current account surplus contracted in October from a year earlier due mainly to a decreased surplus in the goods account and an increased deficit in the service account, central bank data showed Tuesday.

The country's current account surplus reached US$5.72 billion in October, compared with a surplus of $7.69 billion a year earlier, according to the preliminary data from the Bank of Korea (BOK).

The BOK said the goods account surplus narrowed to $8.6 billion in October from $9.16 billion a year earlier.

Moreover, the services account deficit widened to a record $3.53 billion from a deficit of $1.79 billion a year earlier due to a rise in overseas trips and foreign business services.

An increase in outbound travel deepened the travel account deficit to $1.67 billion in October, marking the second-largest monthly red figure. The deficit in part was caused by the 10-day-long Chuseok holiday during the month.

Some 2.23 million people went abroad in October, up a sharp 19.6 percent from a year ago, while the number of foreign visitors slumped 26.6 percent on-year to 1.17 million. In particular, some 345,000 Chinese travelers came to Korea over the one-month period, a 49.3 percent drop from a year earlier

South Korea and China agreed in late October to put their bilateral relations back on the right track, a move that could increase the number of Chinese tourists to South Korea moving forward.

The primary income account surplus increased to $1.17 billion in October from a surplus of $710 million a year earlier. 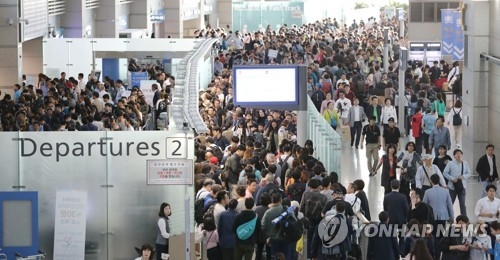