SEOUL, Dec. 5 (Yonhap) -- People in their 30s are most interested in instant meals, a local survey showed Tuesday.

About 38.3 percent of those who searched for home meal replacement products online between July last year and June this year were those in their 30s, according to the survey conducted jointly by Naver, the operator of the country's top Internet portal, and Nielsen Korea, the subsidiary of the global information measurement company Nielson Holdings PLC.

By sex, women accounted for 65 percent of those who searched home meal replacement (HMR) products on the Internet.

By item, instant rice was the foodstuff most frequently searched for at 32.5 percent, followed by refrigerated dumplings at 18.1 percent, soup and stew at 8.4 percent, cereals at 8.1 percent and cereal bars at 6.3 percent.

The use of search terms relating to HMR shot up 132 percent during the cited period compared with a year earlier.

Nielsen Korea data showed that the market for HMR products grew 7.7 percent to 2.01 trillion won (US$1.85 billion) during the first six months of 2017 from a year earlier. 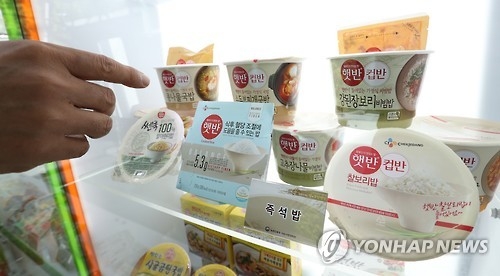 30-somethings are most interested in home meal replacements: survey

30-somethings are most interested in home meal replacements: survey