He had a brief meeting with foreign ministers from 13 Pacific island countries, including Papua New Guinea, Tuvalu, Nauru and Vanuatu, at the presidential office Cheong Wa Dae.

The top diplomats are on a visit here for the third South Korea-Pacific Islands Forum foreign ministers' dialogue. 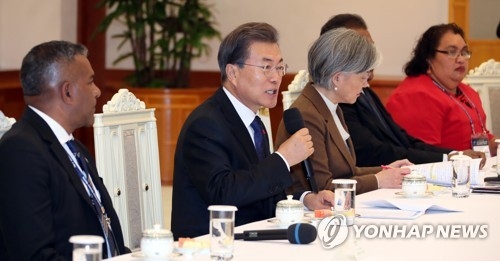 "I hope the meeting will lead to a great outcome that expands development cooperation between the two sides and joint efforts to counter climate change," the president said, according to Cheong Wa Dae pool reports.

Moon also called for increased high-level dialogue between South Korea and the countries.

"I promise South Korea will first work toward that end, and I hope the foreign ministers' talks today will mark a good start," he said.

Also noting the Asia-Pacific Economic Cooperation summit was set to be held in Papua New Guinea next year, the South Korean leader expressed the hope he would visit the country during the annual conference and meet the leaders of the Pacific island countries.