The Seoul Central District Prosecutors' Office said Nam Jae-joon and Lee Byung-kee will stand trial on charges of giving bribes and causing loss of state funds. They were arrested Nov. 17.

The spy agency is suspected of having provided the presidential office with a total of 4 billion won. Another NIS chief, Lee Byong-ho, has avoided arrest, as he has apparently cooperated with the probe.

They delivered the money every month to Park's two senior secretaries, who have also been arrested on similar charges.

Prosecutors suspect Nam first got the agency to give the money to the aides and that Lee Byung-kee doubled the monthly payment to 100 million won.

They have admitted to paying the aides but insisted they thought it was a presidential request that they could not reject.

Prosecutors believe the money was channeled into a secret fund for Park and used for illegal political activities, including election polls for the conservative bloc, and even for her personal purposes. Park is standing trial over a massive corruption scandal that stripped her of power early this year.

Nam also faces charges of coercion and violation of the NIS law that bans political interference. He is accused of forcing a conglomerate to fund a company that had ties with a conservative activist group. 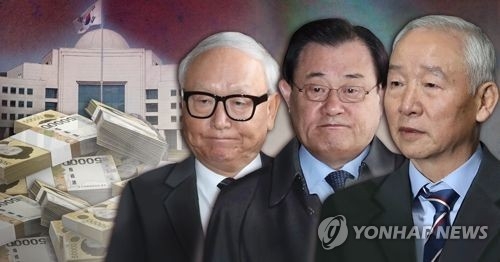