SEOUL, Dec. 5 (Yonhap) -- South Korea will conduct another feasibility study on the construction project for a second airport on Jeju Island next year as a result of local residents taking issue with the site selection process, the transport ministry said Tuesday.

In November 2015, the Ministry of Land, Infrastructure and Transport announced a plan to use 4.87 trillion won (US$4.5 billion) to build the second airport in Seongsan, in the eastern part of the scenic resort island, by 2025.

The new feasibility study will be carried out in February or March, with the results due out in May or June.

The government came up with the plan to meet the rapidly growing travel demand and to avoid any possible conflict of traffic with the existing Jeju International Airport during takeoffs and landings, the ministry said in a statement.

Construction on the new airport may start in late 2018 and be completed by 2025.

The existing airport has exceeded its capacity, as low-cost carriers have increased their flights on the Jeju route to compete with full-service carriers like Korean Air Lines Co.

The current Jeju airport is capable of handling 26 million travelers annually, but the number of travelers to the island is expected to jump to 39.4 million in 2025 from 29.7 million last year, the statement said. 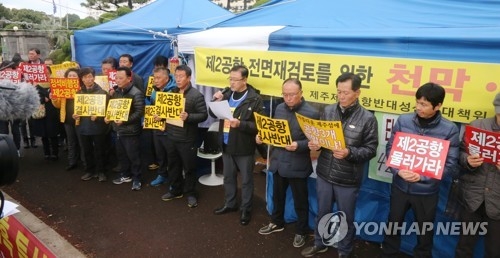 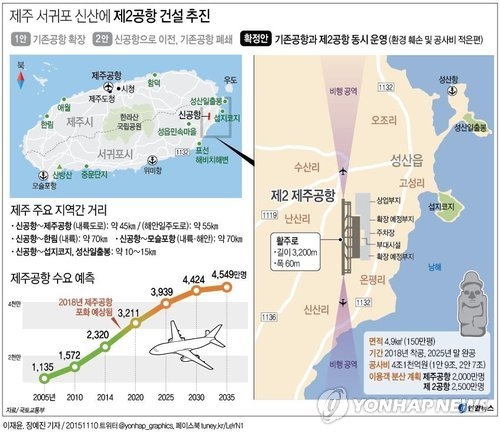 Still, residents of Seongsan have raised questions over the selection process for the site of the new airport, citing the lack of transparency and environmental impact assessment.

In the two years since the ministry's announcement, Seongsan residents have staged rallies to protest the construction project in Jeju and in Seoul.

"The new study appears to be aimed at meeting local residents' demand for transparency. There does not seem to be any move to change the site for the new airport," an official source said.

Gov't to redo feasibility study on 2nd airport on Jeju

Gov't to redo feasibility study on 2nd airport on Jeju