WASHINGTON/SEOUL, Dec. 6 (Yonhap) -- South Korean Foreign Minister Kang Kyung-wha said North Korea has developed its nuclear missile capability at a faster-than-expected pace but has yet to master the technology.

In a CNN interview aired Tuesday, Kang spoke about North Korea's launch last week of a new intercontinental ballistic missile it claims is capable of striking the entire U.S. mainland with a nuclear weapon. 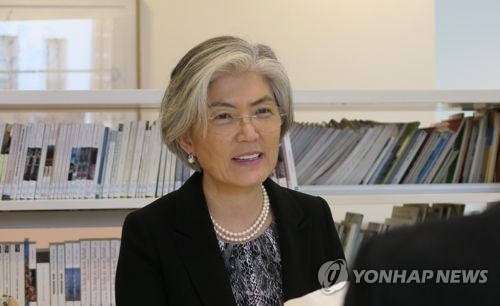 "Yes, they have," she said when asked if the regime appears to have made significant progress in its weapons program. "And at a pace that's far faster than many of us have expected."

But she noted there is still a way to go before North Korea completes the technology.

"There is no concrete evidence that they have mastered the technology that is required to be able to put a nuclear device on a long-range nuclear missile," she said, citing re-entry capability, remote targeting and miniaturization of a nuclear warhead. "They have not yet reached the final, final completion stage yet. I think that would be the shared view of all the technical expertise around this program."

Kang still noted that the North's statement that it has mastered necessary technology needs to be closely analyzed.

She called on the international community to implement all U.N. Security Council sanctions against the regime to force a change of behavior.

Kang reaffirmed that regime change for the North is not on the table.

She said that another war on the Korean Peninsula would be "catastrophic" and "unimaginable," and that all the democracy and thriving market economy that South Korea has built would be wiped out, calling for a peaceful resolution to the current nuclear stalemate.

Meanwhile, asked to comment on the sexual harassment and misconduct scandal gaining much attention in the U.S., and other western countries in recent months, Kang said that though they must be traumatic experiences for those involved, there appears be a "silver lining" in that people will be reminded that their actions have "consequences."

"The idea of gender equality and the society being freed from sexual violence and harassment is the goal that we have to work toward, but we need to find a way then to use this moment to move things forward," she said.