KROMMENIE, Netherlands, Dec. 6 (Yonhap) -- Traffic is busy on a cycle lane on a rainy afternoon, as students ride their bikes home from school. As the road gets quiet, Stan Klerks, an engineer, kneels down to check the wear and tear on the road with his fingers as part of maintenance.

On the surface, there is nothing particular about this bicycle road in Krommenie, a town on the outskirts of Amsterdam. But a closer observation shows that it houses cutting-edge solar technology, a 70-meter-long custom-built solar module placed underneath a layer of 1-centimeter-thick hardened glass.

The lane, named the SolaRoad, is a test project launched in 2014 by the nonprofit Dutch science institute TNO, together with a consortium of energy and tech companies, and the provincial government of North Holland. 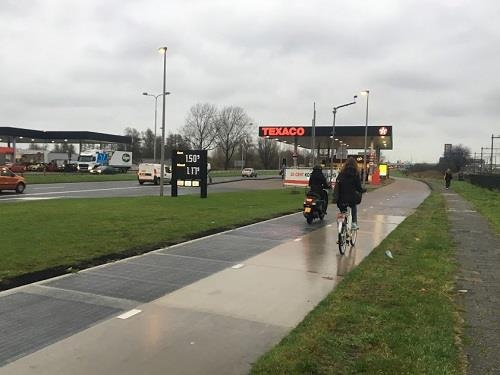 It is part of the Netherlands' goal toward achieving sustainable energy solutions using existing infrastructure, a smart and adaptive plan by a country that's squeezed tight on land. About a quarter of the Netherlands remains below sea level.

"We're a densely populated country, and we don't have a lot of empty spaces to make a giant solar farm. We need to find space to put our renewable energy," Klerks, a lead architect of SolaRoad, said. Within the first year, more than 300,000 cyclists and scooters traveled over the lane.

SolaRoad feeds its acquired energy back to the electric grid. According to TNO, 10 meters of SolaRoad can provide for the annual energy consumption of a single Dutch household. The cost of the pilot project was 3.5 million euros (US$4.14 million).

While the country is famous for its windmills, the Dutch have relied primarily on their massive natural gas reserves for energy. But they have declined sharply in recent years due to ceaseless gas production. According to the World Energy Council, the nation's gas reserves decreased 39.8 percent from 2004 to 2014, a key factor in the Dutch pursuing solar and wind energy solutions. 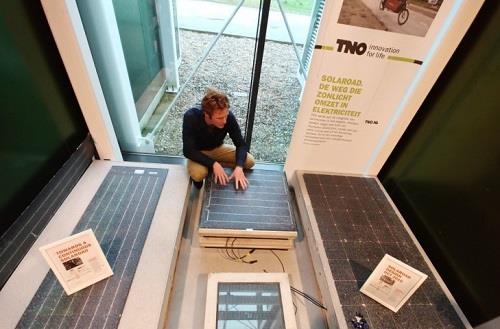 As a member of the European Union, the Netherlands also has to reduce its dependence on fossil fuels. Under its renewable energy directive, EU members are required to increase their investment in low-carbon sources.

The Netherlands has promised to increase the rate of renewable energy in its energy mix to 14 percent by 2020, from the current 5 percent level, and shut down all five of its coal-fired power plants by 2030. A recent government review, however, projected that the country will miss the target and hit 12.4 percent by 2020.

"We are putting a lot in the North Sea and building many wind farms in the sea. But that will not be enough to cater to all the needs. We need solar energy as well," said Kees Willemse, principal business director at TNO.

Bicycles are an indispensable part of the average people's lives in the Netherlands. The country has over 25 million bicycles, more than the country's population of 17 million. The total area of bike roads span around 1,000 square kilometers.

This is a result of efforts in the 1970s to make cities more bicycle friendly after a huge rise in the number of deaths on the roads. Today, TNO is envisioning transforming all of Netherlands' bike roads, and ultimately car roads as well, into SolaRoads.

Consumer demand for renewable and sustainable energy has also increased significantly in recent years. Wind and solar energy demand in the Netherlands surged 20 percent from a year ago, while the country ranks No. 2 next to Norway when it comes to the rate of electric vehicles for new cars, at 9.7 percent as of 2015.

Other regions in the country are also moving to adopt similar solar projects. The southern Uden municipality next year plans to replace 400 meters of noise isolation barriers on roads with new ones equipped with solar modules. The country also constructed its largest solar photovoltaic power station on the northern island of Ameland in 2015. 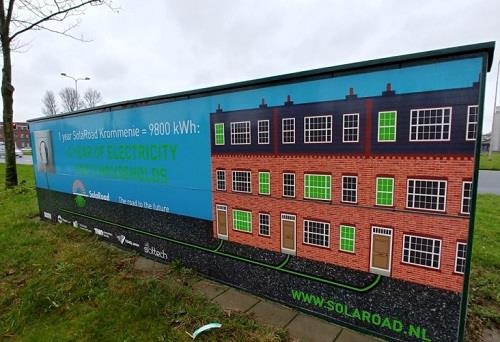 "We're still in testing so it's not easy to predict an exact price model. But we can tell you that the cost of solar panels have fallen 80 percent in the past five years," said Barend Vermeulen, business development manager at Solliance Solar Research.

Vermeulen added: "Due to its limited reserve, gas prices tend to rise as demand increases. But for solar power, the price would actually go down, as mass adoption would drive down the cost of technology and services."

(The trip for this article was sponsored by the Korean Press Foundation.)