SEOUL, Dec. 6 (Yonhap) -- Organizers of the 2018 PyeongChang Winter Olympics said Wednesday they "respect" the decision by the International Olympic Committee (IOC) to ban Russia from the competition over its state-sponsored doping.

The IOC's Executive Board announced in Lausanne, Switzerland, that it would suspend the Russian Olympic Committee (ROC) with "immediate effect." The board acted on recommendations by a commission led by former Swiss President Samuel Schimd, who confirmed "the systemic manipulation of the anti-doping rules and system in Russia."

The IOC said it would only allow individual Russian athletes to compete as neutrals, though they must still meet strict conditions. These athletes will participate under the name "Olympic Athlete from Russia (OAR)," and their uniform will bear the Olympic Flag. Should they win gold medals, the Olympic anthem, not the Russian anthem, will be played in the medal ceremonies. 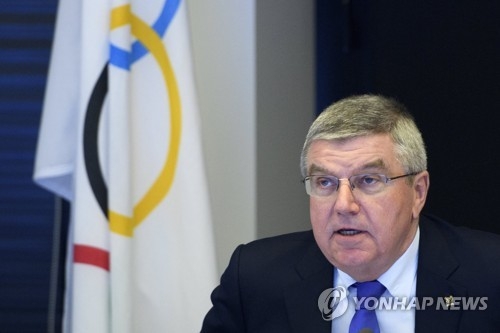 Lee Hee-beom, head of PyeongChang's organizing committee who traveled to Lausanne for the Executive Board meeting, said the IOC at least didn't entirely bar Russian athletes from participating.

"I think the IOC came up with the second-best alternative," Lee said. "Athletes who are clean will still be able to participate and win medals. I think it's fortunate that the IOC will at least allow that, and we welcome that decision."

Asked if he was concerned Russia's absence would affect ticket sales or television ratings at PyeongChang 2018, Lee said: "I am not overly worried because some athletes will still be there. Basically, our organizing committee will have to accept the IOC's decision."

Separately, the organizing committee released a statement saying, "We accept and respect the decisions of the IOC Executive Board that Russia may compete under a neutral flag.

"We will work with the IOC and all other relevant stakeholders accordingly to ensure that all the athletes and officials attending the games as part of this team are given the best experience possible," the statement added.

The IOC also said the ROC must reimburse the costs incurred by the IOC on the investigations into Russia's doping allegations and contribute to setting up of the Independent Testing Authority (ITA) for US$15 million.

According to the IOC, athletes hoping to compete as neutrals must be considered clean by a panel that includes members of pre-Olympics testing task force, and they must not have been previously disqualified or declared ineligible for anti-doping violations. They must undergo all pre-Olympics targeted tests recommended by the aforementioned task force.

Once invited by the IOC, these athletes will "enjoy the same technical and logistical support as any other Olympic athlete," the IOC added.

IOC President Thomas Bach said Russia's statewide doping was "an unprecedented attack on the integrity of the Olympic Games" and added the Executive Board's decisions were "proportional sanctions" for Russia's systemic manipulation.

"This should draw a line under this damaging episode and serve as a catalyst for a more effective anti-doping system led by the World Anti-Doping Agency," Bach said. "As an athlete myself, I feel very sorry for all the clean athletes from all National Olympic committees who are suffering from this manipulation. Working with the IOC Athletes' Commission, we will now look for opportunities to make up for the moments they have missed on the finish line or on the podium."