Several F-35 stealth jets and F-16 fighters of the U.S., as well as F-15Ks and KF-16s of the South, joined the exercise at the Pilsung Firing Range in Gangwon Province, according to the Joint Chiefs of Staff (JCS).

It was part of the annual Vigilant ACE air force practice, which started Monday for a five-day run.

The fifth-generation jets are new to the Vigilant ACE practice.

"Through the exercise, the South Korean and U.S. air forces have demonstrated the alliance's strong will and capability for strong retaliation against North Korea's nuclear and missile threats," the JCS said.

The two sides also sharpened their readiness to deploy a "rapid response force" by improving the interoperability and the capability of carrying out combined operations in peace and wartime, it added.

It's also unusual for the military to make public the deployment of the B-1B supersonic jets, based at the Andersen Air Force Base in Guam, for the exercise. The U.S. has not announced it.

One B-1B was dispatched, a source said, while the JCS stopped short of specifying the number in the statement.

The U.S. sent a pair of B-1Bs to South Korea in early November days ahead of President Donald Trump's regional trip. 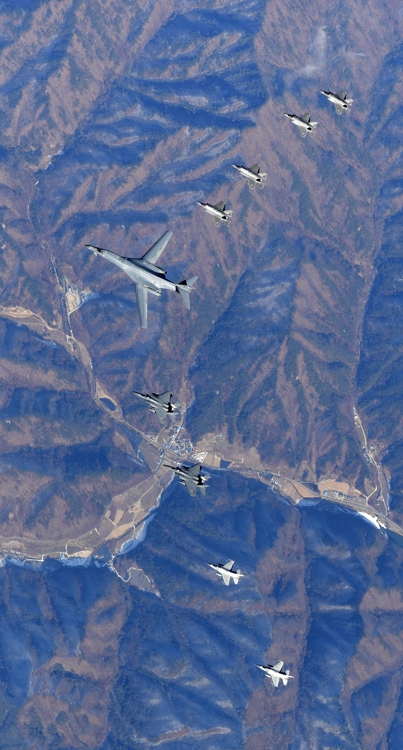