The National Pension Service (NPS) had stakes of 10 percent or more in 84 listed companies as of the end of September, double the number at the end of 2013, according to CEO Score.

The surge was attributed to the easing in September 2013 of a rule banning the NPS from holding 10 percent or more in each listed company.

The combined market value of the NPS stakes in those firms came to 32.1 trillion won (US$29.5 billion) as of end-September, up more than four times over the cited period.

In addition, the pension operator owned 5 percent or more of 275 publicly traded corporations, up 24 percent from four years earlier. The value of the NPS interests in those companies jumped 145 percent over the cited period to 116.9 trillion won. 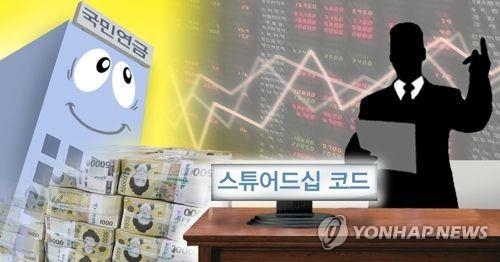 By company, the NPS had the highest stake of 14.3 percent in LG Hausys Ltd., South Korea's top home decoration and construction parts manufacturer, followed by retail giant Shinsegae with 13.6 percent.

The NPS stake in leading automaker Hyundai Motor Co. stood at 8.1 percent as of end-September, up 0.55 percentage point from the end of 2013.

The NPS had 602.7 trillion won under its management at the end of August this year, making it one of the three biggest pension operators in the world.

Last week, the welfare minister said the NPS will introduce a set of guidelines next year to make it more actively engage in corporate governance in the interests of small shareholders.
(END)