SEOUL, Dec. 6 (Yonhap) -- South Korea's central bank is expected to carry out another rate raise in July next year in light of its guarded stance and the country's mild inflation, a private think tank said Wednesday.

In a monthly policy meeting last week, the Bank of Korea (BOK) hiked the so-called base rate by a quarter percentage point to 1.5 percent amid clear signs of an economic recovery, snapping the 16-month run of its wait-and-see stance.

"Some watchers project the BOK to jack up the key rate in the first half of next year, but there is a high possibility that it may conduct another rate raise in July, given the replacement of the BOK chief in March and its prudence," said Song Kyung-hee, a senior researcher at the Woori Finance Research Institute affiliated with Woori Bank.

The three-year term of BOK Gov. Lee Ju-yeol ends in March, and market watchers said there is a low possibility of his reappointment.

The central bank is expected to be more discreet about its monetary policy than expected by market analysts due to minority opinions of a rate freeze at the policy meeting and a slow rise in the country's consumer prices, Song said. 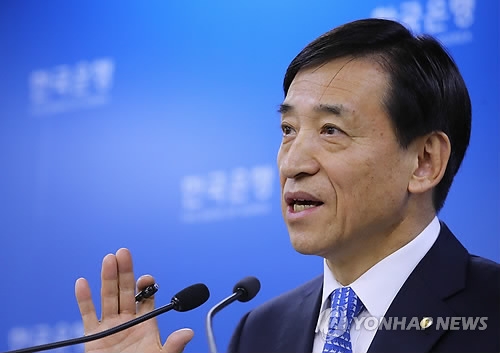 Considering those factors, the BOK will likely carry out an additional rate increase only when an economic recovery pushes up inflationary pressure and there is a need to rein in snowballing household debt, the analyst added.

Song forecast market interest rates to go south for the time being amid waning expectations for an imminent interest rate hike, which may cause bank lending rates to drop.

An increase in the benchmark interest rate usually prompts commercial lenders to charge more on mortgages and other loans, and vice versa.

Meanwhile, Song predicted the South Korean currency's strength against the U.S. dollar to be limited due to the greenback's rally and investors' weaker risk-taking at the end of the year.

"Despite such favorable fundamentals as brisk exports and the BOK's rate hike, there is not much room for the dollar's additional drop," the analyst said. "In addition, the inflow of foreign investment funds may decline at year-end amid persistent concern over North Korea's nuclear program."

BOK forecast to conduct another rate hike in July

BOK forecast to conduct another rate hike in July