SEOUL, Dec. 6 (Yonhap) -- Members of the main opposition Liberty Korea Party boycotted a parliamentary committee meeting Wednesday in protest at the ruling party-led passage of next year's government spending plan, which the opposition party claims is a populist budget. 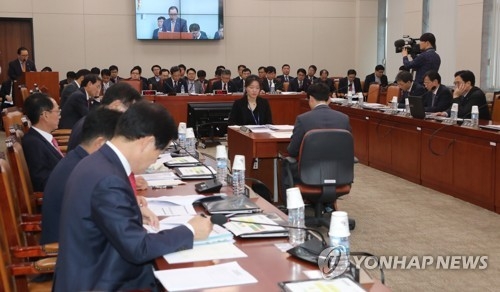 The budget of 428.8 trillion won (US$394.4 billion) passed through the National Assembly in a 160-15 vote during a late-night session early Wednesday as the ruling Democratic Party and the minor opposition People's Party joined forces to approve it while the LKP boycotted the vote to express its objection.

The budget centers on creating thousands of new government jobs, expanding welfare programs and increasing the minimum wage. To fund the increased spending, it calls for raising the corporate and income tax rates for big businesses and top earners.

The LKP has strongly denounced the spending plan as populism.

On Wednesday, LKP lawmakers belonging to the parliamentary trade and industry committee boycotted a committee meeting in protest at the budget's passage.

"It's difficult for us to attend today's plenary meeting after the budget was rammed through. So we asked Chairman Chang Byoung-wan to postpone the meeting," said Rep. Lee Che-ik, leader of the LKP members of the committee.

It is unclear how long the party will continue the boycott.

The rival parties had haggled over key sticking points in the budget, such as the number of government jobs to be created, leading to the missing of the legal deadline for the budget's passage for the first time since the enactment of a law in 2014 aimed at minimizing partisan fighting.

On Monday, the floor leaders of the ruling Democratic Party, the main opposition LKP and minor opposition People's Party reached a compromise by trading concessions on major points of contention, but the deal fell apart as LKP lawmakers refused to endorse it the following day.

Despite the objections, the ruling party and the minor opposition party approved the budget bill as agreed.
(END)