SEJONG, Dec. 6 (Yonhap) -- The South Korean economy is expected to grow 2.9 percent next year, slowing down from this year's estimate of a 3.1 percent expansion, as export growth and domestic consumption recovers, while facility investment declines.

"Our economy's export growth will be maintained and domestic consumption should recover, but a growth of facility investment and construction will slow down," the KDI said in its latest outlook report.

The KDI's latest growth estimate for next year is higher than its earlier forecast of 2.5 percent in April. The institute's 2017 growth forecast is also revised up from its earlier estimate of 2.6 percent.

It predicted that exports, the country's main economic driver, will climb 3.8 percent next year on the back of a continued recovery of global trade, accelerating from this year's estimated 2.4 percent gain.

Growth of private consumption will increase 3 percent next year from an estimated 2.7 percent this year.

Total fixed investment, however, is likely to grow 1.7 percent next year, sharply down from this year's 8.5 percent gain, as facility investment and the construction-related investment suffered a sharp drop.

Facility investment is expected to increase 3 percent next year, decelerating from this year's 8.5 percent gain, while construction investment will rise 0.4 percent in 2018, down from a 7.2 percent jump estimated for 2017.

The country's current account surplus is estimated at US$78.5 billion for next year, similar to this year's $79 billion.

The unemployment rate will stay at some 3.7 percent, slightly down from this year's estimated 3.8 percent.

The think tank, moreover, noted that economic growth will face downside pressures due to rising uncertainties at home and abroad.

"A potential drop in chip prices and a deterioration in terms of trade could force the economy to hover below its growth path," the report said.

"On the domestic side, the economy could be affected by a possible drop in asset prices caused by increased market interest rates and a worsened household debt problem."

The country's central bank is expected to carry out another rate raise next year in light of its guarded stance and the country's mild inflation.

In a monthly policy meeting last week, the Bank of Korea (BOK) hiked the base rate by a quarter percentage point to 1.5 percent amid clear signs of an economic recovery, snapping the 16-month run of its wait-and-see stance.

To cushion the external and internal risks and uncertainties, the monetary and fiscal authorities may have to take a fiscal expansionary and monetary easing stance next year.

"Given the current inflation and economic situation, the country's easing monetary policy needs to be maintained for the time being, and the expansionary fiscal policy should be kept," it said. 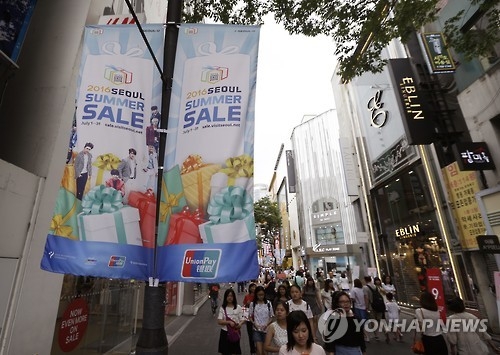