SEOUL, Dec. 6 (Yonhap) -- South Korean President Moon Jae-in called for efforts to further improve his country's ties with Turkey while meeting with the visiting prime minister of the Eurasian country at his office Cheong Wa Dae on Wednesday.

Turkish Prime Minister Binali Yildirim arrived in Seoul on Tuesday on a two-day visit that included talks with his South Korean counterpart Lee Nak-yon. The visit also marked the 60th anniversary of the establishment of diplomatic ties between the two countries. 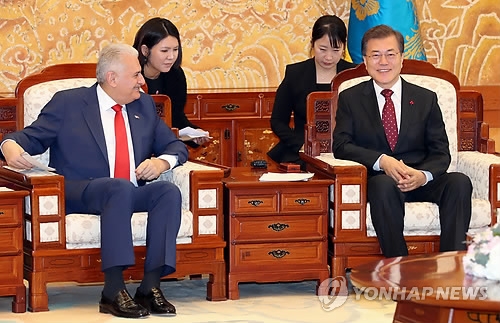 "The relationship between the two countries has developed into a strategic partnership as they expanded cooperation in various areas, such as the political, economic and cultural sectors, over the past 60 years," Moon said, according to Cheong Wa Dae pool reports.

"And also, the countries are working together as responsible developing countries in the international arena, including the Group of 20 meeting," he added, expressing hope they will continue to expand their bilateral ties to form a new and better relationship in the future.

Yildirim agreed the countries' relationship still had room to grow.

"South Korea and Turkey continue to maintain a friendly relationship, but I believe we have great potentials for the South Korea-Turkey relationship and need to work together to further strengthen the ties," he said through his interpreter.

Moon asked for Turkey's support for his new foreign policy, known as the North Policy, which seeks to greatly expand the country's economic and diplomatic ties with Eurasian countries, including Russia.