SEOUL, Dec. 6 (Yonhap) -- South Korean President Moon Jae-in is set to travel to China next week for a bilateral summit with his Chinese counterpart Xi Jinping, the presidential office Cheong Wa Dae said Wednesday, a meeting that will likely focus on ways to rein in North Korea's evolving nuclear and missile technologies.

The South Korean leader will head to Beijing next Wednesday for a four-day trip that will also take him to China's southwestern city of Chongqing. It will mark his first trip to China and his second state visit to a foreign country since taking office in May. 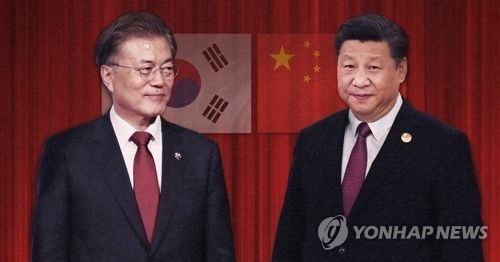 "Through his summit with President Xi and meeting with other Chinese leaders, including Premier Li Keqiang, President Moon will evaluate the development of the relationship between South Korea and China that marks the 25th anniversary of the establishment of diplomatic ties and discuss ways to further develop their relations in the future," Cheong Wa Dae spokesman Park Soo-hyun told a press briefing.

"In addition, the president is expected to discuss ways to peacefully resolve the North Korean nuclear issue and establish peace on the Korean Peninsula," he added.

Moon's trip to China will come two weeks after Pyongyang test-fired an apparent intercontinental ballistic missile, resuming its missile provocations after a 75-day hiatus. The communist state also staged its sixth and most powerful nuclear test on Sept. 3.

The Moon-Xi meeting will mark the third of its kind. The two leaders previously met on the sidelines of the Group of 20 summit and the Asia-Pacific Economic Cooperation forum held in July and November, respectively.

The Cheong Wa Dae official said Moon's trip will also mark the start of what he called a recovery in Seoul-Beijing relations, which were earlier tainted by China's objections to the deployment of the U.S. Terminal High Altitude Area Defense missile system in South Korea.

"The first trip to China since President Moon's inauguration is expected to provide an opportunity to quickly put the countries' bilateral ties and cooperation back on the right track by strengthening the trust and friendship between the two leaders," the spokesman said.

While in Beijing, the South Korean leader will also attend a state dinner to be hosted by Xi, according to Park. He will head to Chongqing on Dec. 15 before returning home the following day.