SEOUL, Dec. 6 (Yonhap) -- Turkish Prime Minister Binali Yildirim promised Wednesday to provide South Korean companies operating in his country with as much support as possible, saying his government will try to treat them as if they were domestic firms.

Yildirim made the remark during a joint news conference after talks with South Korean Prime Minister Lee Nak-yon, where the two sides agreed to bolster cooperation in various infrastructure and other economic projects in Turkey.

"The Turkish government intends to lay the institutional groundwork so as to provide Korean companies in Turkey with more support without regarding them as foreign businesses," Yildirim said through an interpreter. 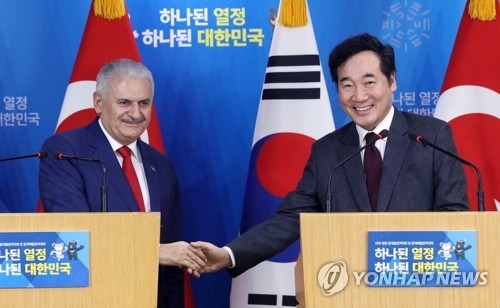 Lee said he and Yildirim shared an understanding that the free trade pact between the two countries has contributed to boosting trade between them since it went into effect in 2013. They also pledged to work together to implement an agreement on services and investment at an early date, Lee said.

The two sides also praised the Eurasia Tunnel and the Third Bosphorus Bridge in Istanbul as successful cases of business cooperation between the two countries, and they agreed to provide support to help complete the Canakkale bridge project successfully, Lee said.

"Going forward, the two countries agreed to cooperate closely on various infrastructure construction projects, such as high-speed railways, undersea tunnels and canals, so that the Turkish government's 2023 vision will be implemented successfully," Lee said.

The two sides also agreed to put together institutional grounds for cooperation in science and technology, as well as information and communication technology, he said.

"Two of us expressed concern about North Korea's firing of a ballistic missile on Nov. 29, and shared the view that the international community needs to continue sending strong messages that North Korea's nuclear program is unacceptable, the Korean Peninsula should be free of nuclear weapons and the North Korean nuclear issue should be resolved by peaceful and diplomatic means," Lee said.

Lee said the two countries agreed to work together for the North's denuclearization.

"These acts by North Korea violating its international responsibility are having a lot of negative effects on the international community. With regard to military provocations often attempted (by the North), Turkey supports South Korea," he said. "I take this opportunity to state that we totally support South Korea on the issue of North Korea."

Yildirim said he asked during the talks with Lee that South Korea impose sanctions on the Fethullah Terrorist Organization or FETO, saying the group is believed to be operating in the South too. The organization, led by Turkish Muslim and Islamic scholar Fethullah Gulen, has been accused by Turkey of masterminding last year's failed military coup attempt.

Turkish PM promises to support S. Korean companies as if they're domestic firms

Turkish PM promises to support S. Korean companies as if they're domestic firms