SEOUL, Dec. 6 (Yonhap) -- A Seoul court on Wednesday turned down an injunction request by some conservative board officials at a media-promoting agency that controls the key public broadcaster MBC to cancel the TV network board's decision to fire its chief.

The Seoul Southern District Court made the ruling, saying that it was difficult to see that the decision-making process at MBC had been "greatly infringed by the board's move that led to the dismissal of the president, as the board officials have claimed."

"It is also hard to accept the argument that the dismissal came from a decision that was made without a thorough and fair review and that it was based on the opinion of a particular interest group," the court said.

The Foundation for Broadcast Culture (FBC), the controlling shareholder of MBC, passed a motion in a November board meeting to remove then-President Kim Jang-kyom from the post, citing his political bias.

The ownership structure of MBC is influenced by politics, which is one of the reasons for the prolonged battle between the management and union under the two conservative administrations of the past decade.

Dozens of MBC news reporters and producers deemed left-leaning have been either sacked or demoted by previous MBC presidents appointed by the then-FBC board, which comprised mainly officials who had ties with the conservative ruling party.

Since the liberal Moon Jae-in government took office in May, the MBC union has ratcheted up its fight against the management and filed a formal complaint with the labor ministry seeking a probe into Kim for violating labor law.

In the meantime, the FBC board of directors was partly replaced with liberal officials after those on the conservative side resigned.

The unionized workers at MBC and another public broadcaster, KBS, have been on strike since September, demanding their presidents step down. KBS chief Koh Dae-young has so far refused to succumb to the pressure.

Separately, the three FBC board members have filed for an invalidity suit regarding Kim's dismissal. 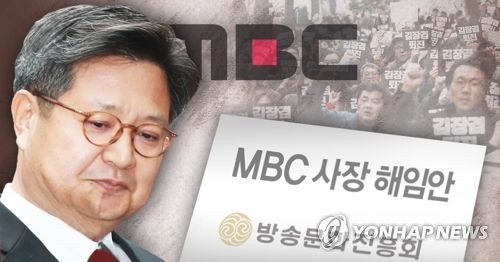