TOKYO, Dec. 6 (Yonhap) -- South Korea women's football head coach Yoon Duk-yeo expressed confidence Wednesday his side can collect victories against rivals at a regional tournament even though they are considered underdogs.

The Taeguk Ladies will compete at the East Asian Football Federation (EAFF) E-1 Football Championship in Japan. South Korea will take on Japan, China and North Korea from Friday to Dec. 15.

South Korea are the lowest-ranked nation in the tournament at No. 15. Japan, 2011 FIFA Women's World Cup champions, are No. 8 in the latest rankings, followed by North Korea at No. 10 and China at No. 13.

They also have losing records against all three opponents: 4-9-14 (wins-draws-losses) against Japan, 4-5-25 against China and 1-3-14 versus North Korea.

Yoon, however, said that his team can upset their opponents.

"All teams play high level football and are competitive," Yoon said at a press conference in Tokyo. "We may be behind those teams on paper, but our desire to win is greater than any one."

The women's edition of the E-1 Football Championship, formerly called the East Asian Cup, began in 2005. South Korea were the inaugural champions, but Japan won back-to-back titles in 2008 and 2010, and then North Korea claimed consecutive titles in 2013 and 2015.

Yoon coached South Korea to third place at this tournament in 2013 and then to second place in 2015.

South Korea will open the tournament on Friday against hosts Japan. They will then face North Korea on Monday and China on Dec. 15. All matches will be played at Fukuda Denshi Arena in Chiba, Japan. 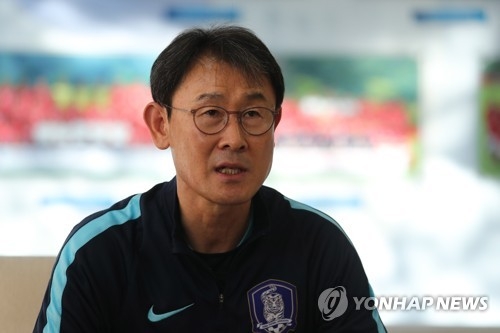 "I think our tournament result depends on our first match against Japan," he said. "Japan will obviously give their best effort in the tournament opener and we'll have a difficult time since they're the hosts. But we must not give up."

Yoon added he also wants to beat North Korea. The 56-year-old, who has been coaching the women's team since 2013, has yet to experience victory against North Koreans.

In their most recent showdown against North Korea in April this year, South Korea managed a 1-1 draw during the Asian Football Confederation (AFC) Women's Asian Cup Group B qualifying tournament in Pyongyang. It was South Korea's second straight draw against North Korea, following a string of nine consecutive losses.

"We want to win our third straight championship," he said. "Whoever we face, we're confident of collecting a win. We have to win."