SEOUL, Dec. 6 (Yonhap) -- South Korea will complete the construction of a planned rare isotope accelerator by 2021 by injecting 1.4 trillion won (US$1.2 billion) into the project, the ICT ministry said Wednesday

The heavy ion linear accelerator complex located in the central city of Daejeon is to produce variety of stable and rare isotope beams to further research in basic science. The complex is named RAON, which means happiness in Korean.

A task force team at the Ministry of Science and ICT said it has decided to complete the complex that was initially set to be built by late this year.

The cavities are part of the linear accelerator that can allow scientists to accelerate particles from very light hydrogen to heavy uranium that may lead to discoveries of rare isotopes that are not normally found in nature.

With the completion of RAON, scientists will be able to probe a wide range of matters that cannot be easily studied and even lead to new discoveries and creations. 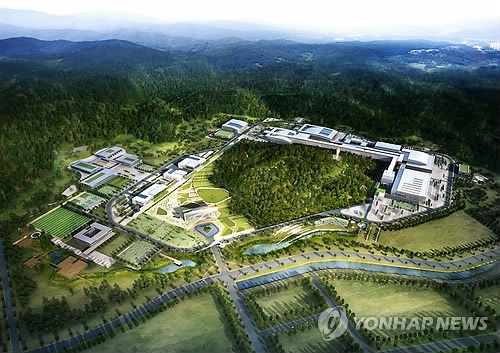