In a drawing held at AFC House in Kuala Lumpur Wednesday, Jeonbuk, the 2017 K League Classic winners, were paired with Kitchee SC, which will make their AFC Champions League (ACL) group stage debut. They will be joined by two teams that come through the playoffs in Group E.

Jeonbuk are looking for their third ACL title. Choi Kang-hee's side previously won the tournament in 2006 and 2016.

Jeju were the only South Korean team that reached the knockout stage in this year's ACL.

The Suwon Samsung Bluewings, which finished third in the Classic, will meet the winners between Eastern SC of Hong Kong and FLC Thanh Hoa of Vietnam to join the group stage. If they win the playoff stage, they'll go to Group H that features the Kashima Antlers of Japan, Shanghai Shenhua of China and Sydney FC of Australia.

The group winners and runners-up will reach the round of 16 at the ACL. The group phase will kick off in February.

South Korea has been the most successful nation at the continent's premier club tournament as its pro clubs have a combined 11 titles so far. 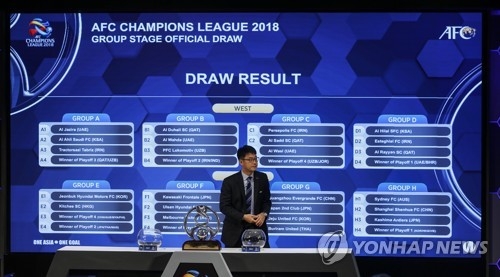