SEOUL, Dec. 7 (Yonhap) -- North Korea has slammed U.S. officials' condemnation over its nuclear and missile programs, warning that Pyongyang will not avoid a war with the United States though it does not want one, Pyongyang's media report showed Thursday.

A spokesman at North Korea's foreign ministry said that bellicose remarks by ranking U.S. officials against the North and ongoing large-scale aerial drills between Seoul and Washington indicate that the U.S. is taking a "step-by-step" approach to provoke a war on the Korean Peninsula.

"We do not wish for a war but shall not hide from it, and should the U.S. miscalculate our patience and light the fuse for a nuclear war, we will surely make the U.S. dearly pay the consequences with our mighty nuclear force which we have consistently strengthened," the Korean Central News Agency (KCNA) reported in English.

The North has long denounced the allies' military exercise as a war rehearsal for an invasion and used it as an excuse for provocations.

Key U.S. officials have issued warnings against the wayward regime after the North on Nov. 29 fired a new intercontinental ballistic missile that it claims is capable of striking anywhere in the U.S.

U.S. National Security Advisor H.R. McMaster said that he thinks the possibility of war with North Korea is "increasing every day."

Mike Pompeo, the director of the Central Intelligence Agency (CIA), said last week that North Korean leader Kim Jong-un does not know about how precarious his position is in the world.

North Korea said that a series of war remarks from U.S. officials have made "an outbreak of war on the Korean Peninsula an established fact."

"If the U.S. does not want to be burnt to death by the fire it ignites, it would better behave with prudence and caution," the KCNA added. 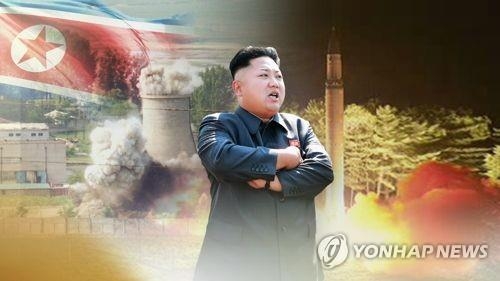 N.K. warns it will not avoid war with U.S. though it does not want one

N.K. warns it will not avoid war with U.S. though it does not want one