According to the data compiled by IHS Markit and other industrial sources, Samsung Electronics Co. accounted for 44.5 percent of the market in the third quarter in terms of revenue, followed by SK hynix Inc. with 27.9 percent.

The combined revenue of the sector around the globe is estimated at US$19.7 billion for the July-September period, posting a 35 percent growth from a quarter earlier to set a new record.

As for the NAND flash memory chips, Samsung accounted for 39 percent of the market in the third quarter, followed by Toshiba Corp. with 16.8 percent and Western Digital with 15.1 percent. Micron and SK hynix took up 11.3 percent and 10.5 percent, respectively.

Industry watchers said contrary to concerns that the global chip industry will lose heat in the near future, the demand in the sector will continue to expand on the back of the expansion of products equipped with artificial intelligence and Internet-of-Things technologies.

Samsung and SK hynix also boast strong technology competitiveness compared with newcomers from China, and are set to stand as major players down the road, they added. 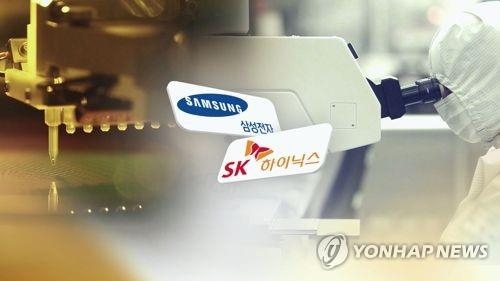