SEOUL, Dec. 7 (Yonhap) -- South Korean retail giant Lotte faces a bumpy road as it moves to adopt a holding company system even though it has sharply cut the number of units that own one another, industry sources said Thursday.

According to the sources, 11 Lotte subsidiaries had stakes in affiliates through cross-shareholdings as of Wednesday, down from nearly 50 before the launch of the holding company.

Under South Korean law, Lotte, the country's fifth-largest conglomerate, is required to eliminate cross-shareholdings among the remaining units by early April next year.

A cross-shareholding system is a hallmark of South Korea's family-controlled conglomerates, known here as chaebol, which enables them to control their sprawling business empires.

Market watchers said the most effective way to meet the requirement is for Lotte subsidiaries to sell their stakes in the holding company. 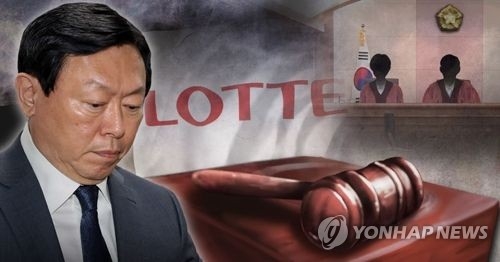 But the group may face a big hurdle should its chairman, who has been on trial for charges of managerial irregularities, receive a guilty verdict or a prison sentence later this month, they added.

A sentencing hearing for Shin, the largest stakeholder of Lotte's holding company, is scheduled for Dec. 22.

"If Shin were dealt a guilty verdict or sentenced to a jail term, Lotte's efforts to improve its governance would hit a snag," an industry source said.

Such a court decision would come as a major hurdle to the planned mergers of Lotte's chemical units and the Korea Exchange's deliberation of Hotel Lotte Co.'s listing, he said. One of the listing requirements is managerial transparency.

The group's push for an initial public offering of Hotel Lotte, which had served as its de facto holding firm, has been held back due to unfavorable market conditions.

Founded in Japan in 1967, Lotte grew into one of South Korea's major chaebol, driven by its success in the retail, food and amusement businesses. The group's business includes chemicals, duty-free, finance and construction with a global workforce of 125,000.
(END)