SEJONG, Dec. 7 (Yonhap) -- Moms in their 40s with older children and higher educational backgrounds were found to be the most employed among mothers, data showed Thursday.

According to the data compiled by the Statistics Korea, moms aged between 40 and 49 accounted for 52.7 percent of all working moms with children younger than 18 years, the highest among other groups of women.

By educational background, mothers with university degrees accounted for 58.7 percent of all working moms, according to the data.

The data also showed that working mothers with fewer older child were much more likely to be employed compared with those who did not.

In South Korea, female labor participation has been rising, but at the same time, many women are quitting their jobs due to marriage, pregnancy and childbirth.

The government has been working on a variety of programs to get women who left workplaces due to child rearing and other family-related duties to resume their careers in a bid to raise the country's growth potential. 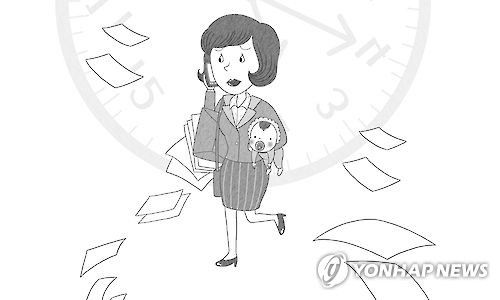 Most employed mothers in 40s, have older children: data

Most employed mothers in 40s, have older children: data