SEOUL, Dec. 7 (Yonhap) -- South Korea on Thursday encouraged Russian athletes to compete in the 2018 PyeongChang Winter Olympics as neutral individuals, amid a ban on Russia competing over its state-sponsored doping.

The International Olympic Committee's Executive Board announced in Lausanne, Switzerland, this week that it would suspend the Russian Olympic Committee with "immediate effect." The board acted on recommendations by a commission led by former Swiss President Samuel Schmid, who confirmed "the systemic manipulation of the anti-doping rules and system in Russia."

South Korea's Ministry of Culture, Sports and Tourism issued an official statement on the IOC decision, saying that it "feels regretful" over the Russia ban.

The ministry added that it "expects the PyeongChang Winter Olympics to be a good opportunity to further strengthen the traditional friendly relationship between Korea and Russia, and to meet many Russian athletes."

"We urge active participation of winter sports athletes from all over the world, including Russian athletes," the ministry said.

The IOC said it will allow individual Russian athletes to compete as neutrals, though they must still meet strict conditions. These athletes will participate under the name "Olympic Athlete from Russia," and their uniform will bear the Olympic Flag. Should they win gold medals, the Olympic anthem, not the Russian anthem, will be played in the medal ceremonies.

Russia has been a strong Winter Olympic presence across the board for years, and a boycott would deal a blow to PyeongChang 2018 in terms of ticket sales and TV ratings. 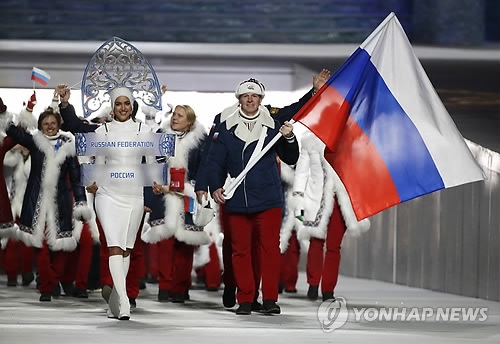 S. Korea encourages Russians to compete in PyeongChang as neutrals

S. Korea encourages Russians to compete in PyeongChang as neutrals