SEOUL, Dec. 7 (Yonhap) -- South Korea's top court on Thursday quashed an appellate court ruling on the daughter of retail giant Lotte Group's founder accused of bribery and other charges, ordering a retrial of the case as the acquittal of some of her charges need to be readdressed.

The Supreme Court delivered the judgment on Shin Young-ja, head of the Lotte Foundation. She stands accused of receiving at least 2.2 billion won (US$2 million) from various companies for over eight years in return for business favors related to Lotte's duty-free shops and department store.

The 75-year-old defendant was found guilty of breach of duty, embezzlement and bribery by the two lower courts. But the appeals court in July commuted her sentence by one year to two years in jail as it cleared her of some of the bribery charges.

The Seoul High Court had agreed with the defense argument that some of the bribes that a local cosmetics firm paid to her son's company in exchange for business opportunities cannot be seen as the money Shin pocketed.

But the top court stated in Thursday's ruling to the effect that such money is also part of the bribes she took, and that there are sufficient grounds to constitute her conviction for all of the charges.

Shin is the eldest daughter of Shin Kyuk-ho, the founder of Lotte, the fifth-largest conglomerate in Korea. Her 95-year-old father and current group Chairman Shin Dong-bin are also currently standing trial without detention over a string of corruption charges. 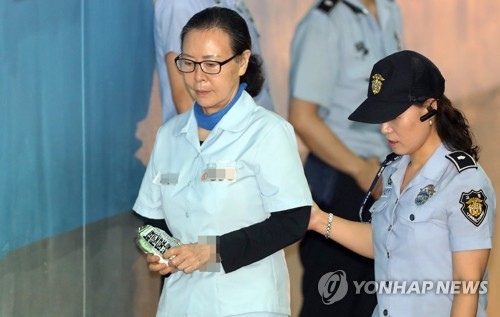