SEOUL, Dec. 7 (Yonhap) -- Unionized workers at Hyundai Motor Co. will continue to walk out next week for higher wages and bonuses after the company rejected the union's demands, the union said Thursday.

"In the past eight months of negotiations, the company has not shown any 'progressive' approach in the wage deal, repeating it faces difficult times and does not have room to fully accept the union's demands," the union said in a statement.

As the union does not expect a breakthrough in the wage talks this year, it has no option but to enter an extended fight against the company's "insincere and arrogant" attitude toward the union, the statement said.

The company has balked at accepting the union's demands, citing a deteriorating business environment in global markets in recent years. 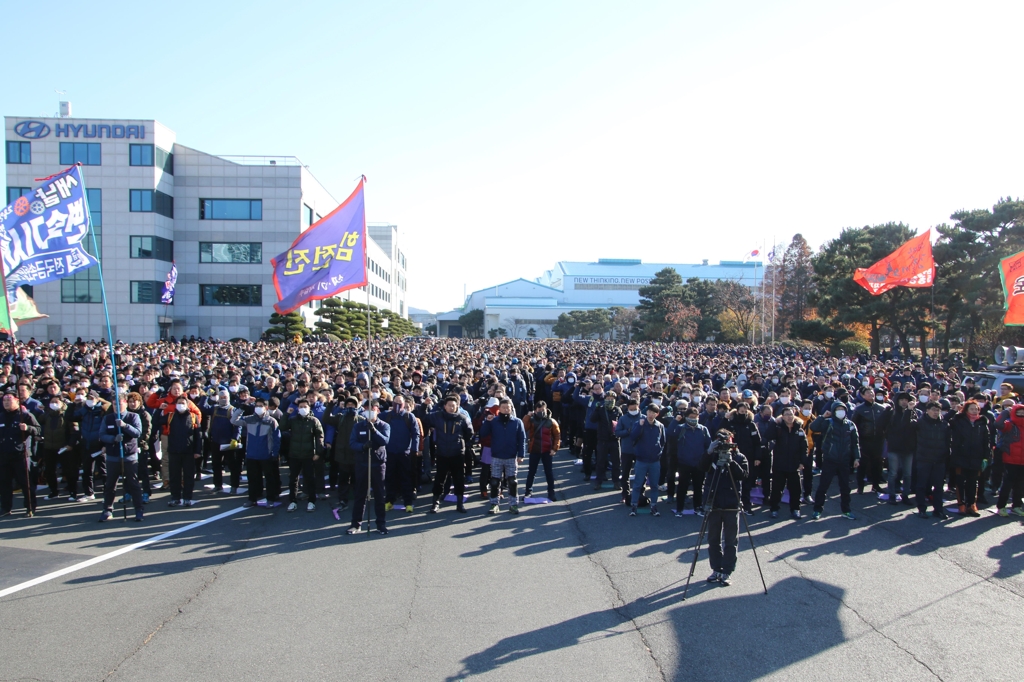 From Tuesday to Friday, Hyundai's 51,000-member union has been staging a partial strike by suspending assembly lines at its five plants in Ulsan, about 410 kilometers southeast of Seoul, for four to six hours a day to make their demands heard in the wage deal, according to the company and its union.

Hyundai workers will continue to lay down their tools for six to eight hours a day from Monday to Friday next week at the Ulsan and other domestic plants, the union said.

The planned strikes will be a big burden for Hyundai Motor as they will result in delays in planned deliveries of new vehicles such as the Kona subcompact sport utility vehicle to major markets, industry people said.

As of Wednesday, industrial action at Hyundai's domestic plants this year has already reduced the company's output by 43,000 vehicles worth about 890 billion won, according to the company.

Hyundai Motor currently operates seven plants in Korea, including five in the port city of Ulsan. It also has production facilities in the United States, Europe and emerging countries such as China, India and Russia.

In the January-September period, Hyundai Motor's net profit fell 30 percent to 3.26 trillion won from 4.65 trillion won a year earlier due to lack of new models and sharp sales declines in China amid a bilateral diplomatic row over the deployment of a U.S. anti-missile system in South Korea.