Rep. Lee Hae-chan of the Democratic Party made the suggestion in a speech set to be delivered at a security conference, saying 2019 will be good for a summit because the year is meaningful as the 100th anniversary of the 1919 nationwide uprising against Japanese colonial rule and the establishment of a provisional government.

"If possible, it's important to push for a South-North summit in the first half (of Moon's five-year term)," Lee said during the conference organized to mark late former President Kim Dae-jung's winning of the 2000 Nobel Peace Prize following the first inter-Korean summit ever earlier that year.

"If a summit takes places in the second half, it would be difficult to guarantee its effectiveness," he said. 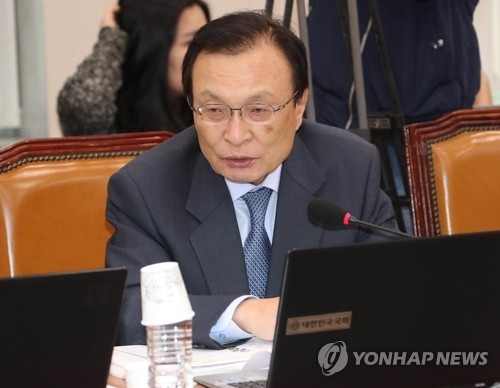 The two Koreas have held two summits so far, the first in 2000 between then-President Kim and then North Korean leader Kim Jong-il, and the other in 2007 between then-President Roh Moo-hyun and the North's leader. Inter-Korean relations have since worsened seriously under the two successive conservative administrations of Lee Myung-bak and Park Geun-hye.

Despite the nuclear and missile tensions, Lee said that Seoul should make efforts next year to restore dialogue channels with the North and foster an atmosphere for talks so that a summit can take place the following year.

"Even in the middle of a situation dominated by nuclear and missile provocations and sanctions, we need to have a flexible strategy so as to induce dialogue and negotiations," Lee said. "We have to encourage North Korea's participation in efforts to make the PyeongChang Olympics a peace Olympics and suspend military exercises during the period to create an atmosphere for dialogue."

Seoul should consider sending a special envoy to the North to ask for its participation in the Winter Olympics, Lee said. He also said that the two Koreas should restore a hotline to prevent accidental military clashes.
(END)