SEOUL, Dec. 7 (Yonhap) -- The ruling and opposition parties agreed Thursday to open an extraordinary session of the National Assembly next week to deal with a series of key pending bills, including a measure to establish an investigative agency dealing exclusively with corruption involving senior officials.

The floor leaders of the ruling Democratic Party, the main opposition Liberty Korea Party and the minor opposition People's Party told reporters after a lunch meeting that they agreed to convene a two-week session from Monday next week.

The regular National Assembly session, which opened on Sept. 1, will close on Friday. During the session, the government's budget and a number of other measures were passed, but a series of key bills have yet to be dealt with.

They include some contentious bills, such as the ruling party-backed proposal to create a new investigative agency dealing exclusively with corruption cases involving senior government officials as well as a measure to reform the National Intelligence Service. 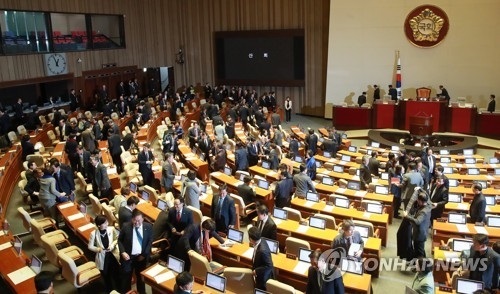