SEOUL, Dec. 7 (Yonhap) -- The defense ministers of South Korea and Mongolia agreed Thursday to work together to resolve the North Korean nuclear and missile issue in their talks here, Seoul's defense ministry said.

The country's defense chief, Song Yong-moo, asked Mongolia to take an active part in the international community's sanctions on North Korea for its illicit weapons development.

Song requested Mongolia's efforts to persuade the North to denuclearize itself in consideration of their traditional diplomatic ties, according to the ministry. 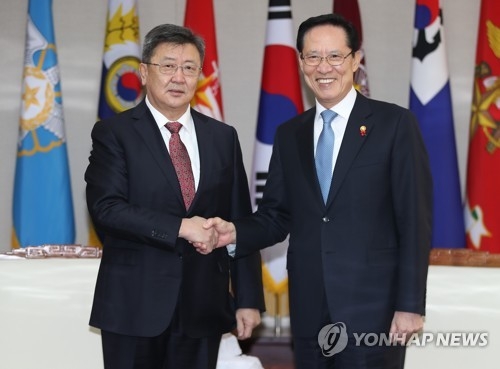 He was quoted as saying that his government will continue to cooperate with South Korea on the North's threats to jeopardize the peace and stability of the peninsula and the world.

The ministers also agreed to push for the expansion of military partnerships and defense industry cooperation between their countries.

Enkhbold invited Song to visit Mongolia at a convenient time and Song said he will consider the trip.

He's on a visit to Seoul to attend the South Korea-Mongolia business forum.