Yang, voted the regular season MVP in the Korea Baseball Organization (KBO) last month, received the Player of the Year accolade by the Korea Professional Baseball Alumni Association (KPBAA). The KPBAA, an organization founded to help retired baseball players, created the awards in 2014.

His latest honor follows the award given by active players in the KBO. On Tuesday, he was voted the best player at the 2017 Players' Choice Awards, hosted by the Korea Professional Baseball Players Association.

Yang, a left-handed ace for the Kia Tigers, set a career high with 20 victories in 31 starts in 2017, becoming the first South Korean pitcher in 22 years to notch 20 wins in a season. He posted an ERA of 3.44 to rank fifth in the league and claimed his first MVP award in November.

The 29-year-old was also voted the MVP of the Korean Series, as his Tigers knocked out the Doosan Bears in five games to capture their first championship since 2009. Yang threw a complete game shutout in Game 2 and came out of the bullpen to record a save in the clinching Game 5.

Yang is the first player to win both the regular season and Korean Series MVP awards in the same season.

Other winners on Thursday's awards ceremony include Nexen Heroes outfielder Lee Jung-hoo who was named the best rookie. The 19-year-old set KBO rookie records with 179 hits and 111 runs scored, and was the runaway winner of the Rookie of the Year award in the regular season.

SK Wyverns slugger Choi Jeong, who topped the league with 46 home runs, was selected as the best hitter, while Lotte Giants closer Son Seung-lak received the best pitcher award after leading the league with 37 saves.

Former Samsung Lions slugger Lee Seung-yuop, who retired after this season as the KBO's all-time leader in home runs, received a special award from the KPBAA for his achievements. 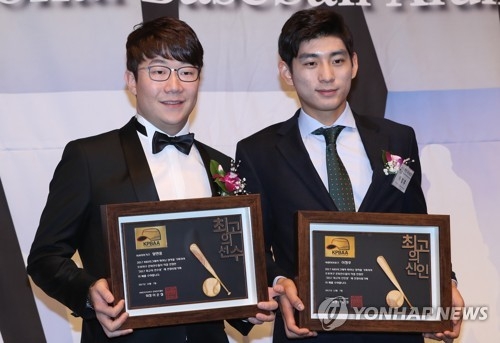