SEOUL, Dec. 7 (Yonhap) -- The International Committee of the Red Cross (ICRC) deployed a specialist clearance team to North Korea last month to assist the North's efforts to get rid of the remnants of unexploded munitions from the 1950-53 Korean War, a U.S. broadcaster reported Thursday.

According to Radio Free Asia, the International Red Cross said in a report on Monday the team tackling weapon contamination trained a North Korean explosive disposal group in Pyongyang. Weapon contamination refers to a situation in which unexploded and abandoned mines, explosives and shells continue to kill or maim people after an armed conflict.

During a two-day stay in Pyongyang, the team taught the North Korean group about how to safely remove unexploded weapons, gave instructions on how to treat residents injured by unexploded remnants, and provided the North with equipment needed for clearing them, the report said.

ICRC also said the train was focused on the safety of North Korean residents' lives, adding it will conduct a new training session to nurture members of explosive disposal teams.

The number of explosions of unexploded shells since the end of the three-year conflict has amounted to 5,024, and those killed or injured 16,215 people, the ICRC report said.

It also said North Korean residents worry about unexploded remnants and have difficulty accessing farm products and water resources due to those worries. 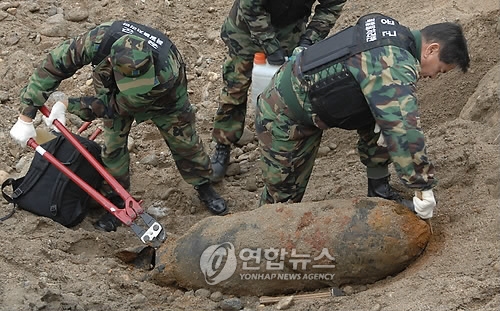