Lee made the remark during a graduation ceremony at National Defense University, noting that last week's ballistic missile launch by the North showed the missile can strike as far as Washington.

"Based on the firm Korea-U.S. alliance, the government will work with the international community to impose sanctions and put pressure on North Korea in the strongest manner," Lee said. "The international community, including the U.S., has begun to put strongest-ever sanctions and pressure against the North and this will continue until North Korea changes its attitude."

The North's provocations are not only a threat to world peace, but to the regime itself, Lee said.

"North Korea must face this reality squarely and take a reasonable course now, even belatedly," he said. "As long as the North sticks with its current attitude, it will end up giving itself irrecoverable destruction." 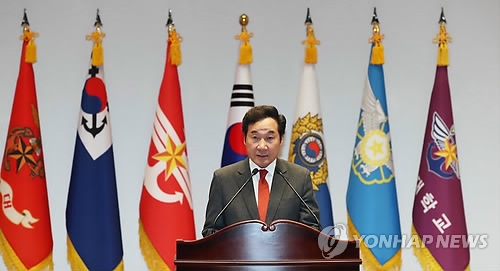