SEOUL, Dec. 7 (Yonhap) -- Actor Kim Rae-won said he was pleased to reunite with actress Shin Sae-kyeong in their new drama "Black Knight: The Man Who Guards Me" for the first time in 14 years.

"I'm so glad and pleased to meet her again," Kim said of his co-star Shin on Dec. 5 during a press conference for the new KBS 2TV late night drama.

The two appeared together in the 2004 movie "My Little Bride," a film in which Shin made her show business debut.

"I was 14 and it was such a long time ago. I was clumsy and didn't know anything. We didn't see each other that much on set, but it remains a significant work for me," Shin said. 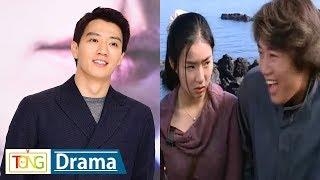