Ju is a member of the South Korea national football team that will compete against Japan, China and North Korea at the East Asian Football Federation (EAFF) E-1 Football Championship. The men's competition will be staged at Ajinomoto Stadium in Tokyo from Saturday to Dec. 16.

Ju, who has one goal in six international appearances, was on the South Korean team that won the 2015 tournament in Wuhan, China. The 27-year-old said the players are determined to defend their regional title.

"I have good memories of the 2015 tournament in Wuhan, China," Ju told reporters before training. "Obviously, our goal is to win the championship."

Ju, who plays for the K League Classic side FC Seoul, will undergo basic four-week military training next year with his club and national teammate Lee Myung-joo before they join police football club Asan Mugunghwa FC for their military duty. South Korean male football players can complete their mandatory military service while playing sports if they can get admission to the police team or the military football club, Sangju Sangmu FC.

"I want to start my military duty on a high note, so I really want to win," he said. "Since this is a tournament for South Korea's preparations for the World Cup, I have to play well in order to join the national team, even after I get conscripted."

Ju, who made his international debut in 2015, said the players are ready to execute head coach Shin Tae-yong's game plan.

"Shin has asked us to run more than our opponents and emphasized (playing) a pressing game," he said. "When you're representing your country, your goal is to collect a victory, whether the opponents are strong or weak."

South Korea will open the tournament against China on Saturday and take on North Korea on Tuesday. Shin's side will wrap up the tournament on Dec. 16 with a match against hosts Japan. 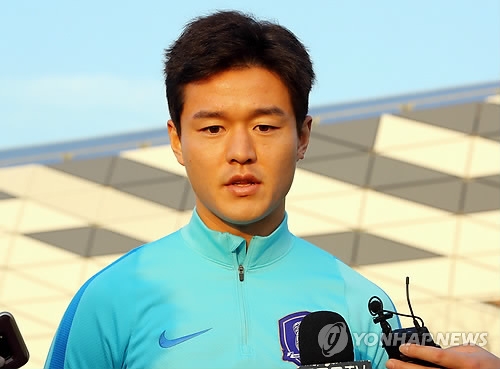