SEOUL, Dec. 7 (Yonhap) -- The U.S. flew two B-1B supersonic bombers over Korea on Thursday, the second sortie carried out here this week by the Guam-based aircraft, a defense official said.

The Lancer bombers trained with more than 20 of the allies' fighter jets as part of their annual Vigilant ACE air force practice.

They entered the Korean Air Defense Identification Zone (KADIZ) through the sky over the waters south of Jeju Island and conducted simulated bombing drills over the Yellow Sea near North Korea and China, according to the official.

On Wednesday, the U.S. dispatched a B-1B jet to Korea for a joint training exercise with several warplanes, including F-22 and F-35 stealth fighters.

It is quite unusual for the U.S. to send its B-1B aircraft stationed in Guam to Korea on two consecutive days. 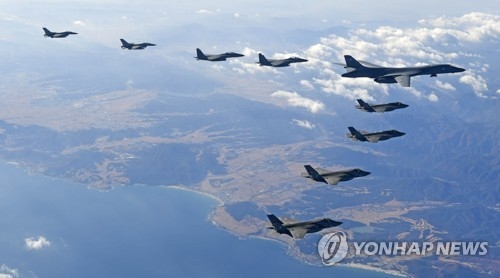 However, U.S. stealth jets did not join Thursday's practice, said the official, who asked not to be named.

The Vigilant ACE exercise started on Monday for a five-day run.

"The overall scale of forces helps contribute to a realistic site picture for those participating, especially with regard to air assets integrating in a war-time scenario with their support personnel and equipment," the U.S. military said.