TOKYO, Dec. 7 (Yonhap) -- The chief of Japan's Komeito party vowed Thursday to make efforts to have large numbers of Japanese people visit South Korea on the occasion of the 2018 PyongChang Winter Olympics, the South Korean Embassy in Tokyo said.

Natsuo Yamaguchi, the leader of Komeito, which is the ruling coalition partner of Japan's Liberal Democratic Party, made the remarks as he paid a visit to South Korean Ambassador to Japan Lee Su-hoon at the embassy earlier in the day.

Yamaguchi said, "the successful staging of the Feb. 9-25 sports event will greatly contribute to the success of the 2020 Tokyo Summer Olympics and the 2022 Beijing Winter Olympics," according to an embassy official. 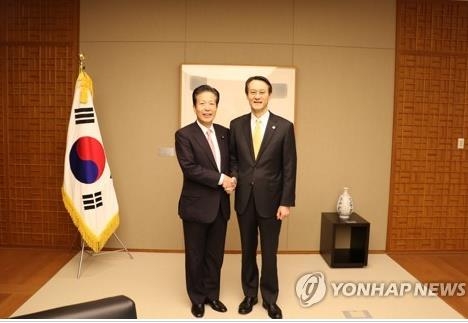 "I hope the 2018 PyeongChang Winter Olympics will become a good opportunity to bring peace to the Korean Peninsula and the Northeast Asia," Yamaguchi was also quoted as saying.

During the meeting, Lee reiterated South Korea's invitation to Japanese Prime Minister Shinzo Abe to attend the Olympics, saying the prime minister's attendance would help make the Olympics a peaceful event and stabilize the region, as the Komeito party is organized under the banner of peace.

When South Korean President Moon Jae-in asked Abe to attend the Olympics during a phone call following North Korea's latest missile test on Nov. 29, he said he would see if a trip is possible, noting that a parliamentary session is scheduled to take place during the Olympic period.

Yamaguchi met Lee to hold talks on his four-day visit to South Korea from Nov. 22 and ways to enhance relations between the neighboring countries.

He said he took a KTX express train from Incheon airport, west of Seoul, to PyeongChang, the venue of the Olympics, and Gangneung on South Korea's east coast. He added that he is sure the PyeongChang Olympics will be a success, as South Korea's preparations for the event are making steady progress.