SEOUL, Dec. 8 (Yonhap) -- Kim Eun-ah, who asked for an alias, realized at the age of 37 that having a child had become a difficult and very expensive task. Kim, with her husband of seven years, had initially postponed having kids as they wanted to be more financially stable and able to settle down.

"I never thought that having a baby would be this difficult, as I mistakenly thought I could always have one whenever I desired," Kim said. "I did not think for a moment that we would be labeled as infertile."

According to data from the Ministry of Health and Welfare, the number of couples seeking medical help for infertility increased from 178,000 in 2006 to 215,000 in 2015. More than 200,000 Koreans are diagnosed with fertility problems annually.

Infertility is defined clinically in women and men who cannot achieve pregnancy after one year of having intercourse without using birth control, and in women who have two or more failed pregnancies.

Kim, who has tried for nearly a year, recently visited a genetic counselor to learn more about various infertility treatments, which range from freezing embryos while waiting for a child to the more radical treatment of in-vitro fertilization (IVF).

In a move to tackle the chronic low birthrate and aging population that may hurt Asia's fourth-largest economy by reducing its workforce and driving up welfare costs, the government in recent years has provided subsidies for infertility treatment for more couples. The state is footing a greater cost for treating infertility through national health insurance, which includes three rounds of artificial insemination and a maximum of four sets of external fertilization procedures.

Seoul, in addition, has expanded time off work for women expecting babies and has pushed to get more women to take maternity leave.

Despite such efforts, an all-time low of 406,300 babies were delivered in South Korea last year, and the fertility rate was 1.17, the lowest number in seven years. Many are predicting that this year's numbers may be even worse, with little prospect of things picking up in the near future.

"As a couple, our annual income is above average, so it is welcome news that the government is expanding coverage for everyone, as it costs around 6 million won for the three sets artificial insemination," Kim said. Six million won is around US$5,300. In the past, state support was only offered to low income families.

However, more couples have asked the government for expanded benefits, as it can cost up to 20 million won per year if the initial trials fail and couples seek help from Korean traditional medicine and various nutritional supplements.

Another want-to-be-mom recently posted her story on the online community of the nation's largest portal site, Naver.

"I spent more than a total of 20 million won last year. ... I had to seek a part-time job as, in the end, I could not support the treatment with my husband's salary alone," she said on her post.

She also noted that at some fertility clinics located in the upscale southern Seoul district of Gangnam, fees for fertility testing, insemination and IVF are almost double the cost of the national average.

"Despite such steep prices I have no choice but to visit such clinics, as I am that desperate," she said. She hopes the government will take measures against that trend.

Many of the couples, however, point out that they are fighting a bigger battle: taboo and social stigma.

An industry survey showed that six out of 10 couples hid their infertility from family and friends and more than half of the women fighting with infertility did not share the issue with their mothers.

"Just because we cannot conceive a baby naturally does not mean that we should be ashamed and hide the fact," Kim said. "I think openness is important."

Choi Hwa-yeoung, an infertility expert at Obstetrics Maria Branch located in Seoul, said most of her patients complain about their battle against cultural taboos.

"In our society, it is often blamed on women when they cannot conceive babies in a natural way," Choi said. "Infertility is a very complex problem due to many different causes affecting both men and women." 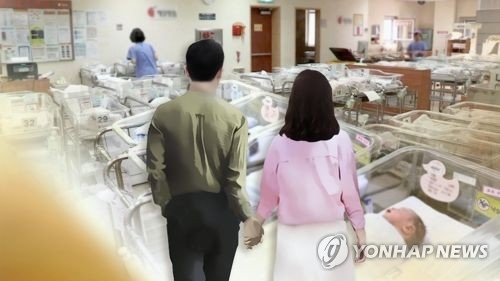