SEOUL, Dec. 8 (Yonhap) -- South Korea will ramp up efforts to develop technologies related to nuclear decommissioning as the country's oldest reactor is undergoing the lengthy, costly process of being dismantled, the energy ministry said Friday.

The ministry said it aims to develop technologies needed to dismantle nuclear reactors by 2021 that will make such sites free of radioactive hazards and establish a research institute to pave the way for entering the global market by 2030. 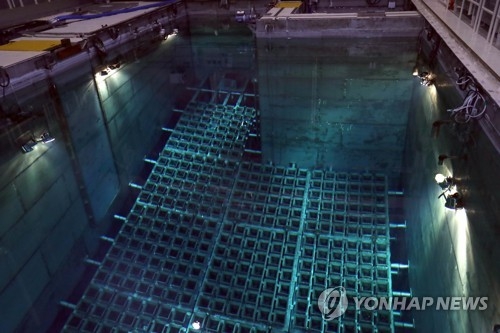 The tough task is gaining importance as the state-run Korea Hydro & Nuclear Power Co. (KHNP) is preparing steps to decommission the Kori-1 unit, which was shut down in June following 40 years of commercial use.

It is one of 24 nuclear power plants in Asia's fourth-largest economy, which are responsible for about 30 percent of the nation's total electric energy generation.

"By taking steps to dismantle the Kori-1 reactor, South Korea will have to upgrade the decommissioning industry's capacity ranging from business management, technology equipment and professional staff," Park Won-ju, a ministry official in charge of the energy policy, said during the meeting with industry officials.

A total of 11 reactors will be retired one by one by 2030 as their operational life cycles expire as the government said it won't extend their operation.

According to the International Atomic Energy Agency (IAEA), 34 nations have built 611 reactors and 449 were in operation as of April 2017. Among 160 reactors permanently shut down, the decommissioning process has been completed for 19.