SEOUL, Dec. 8 (Yonhap) -- South Korea will engage in constant, pre-emptive, market-centered corporate restructuring going forward, breaking away from government-spearheaded responses to developments that have been the norm in the past, the country's chief economic policymaker sad Friday.

"The government will reshape its corporate restructuring paradigm in a way that can prod existing companies to seek innovation and strengthen their competitiveness," Finance Minister Kim Dong-yeon said at an economy-related ministers meeting.

"A market-centered restructuring approach will be sought after, and the government will set up a fund to facilitate corporate restructuring," he said.

Under the plan, key economy-related agencies and private think tanks will regularly analyze major industrial sectors' business conditions, their competitiveness and risk factors, and based on the results draw up a set of plans, including schemes to revamp businesses.

When a certain company exerts an impact on the economy any restructuring should be considered from both the industrial and financial sides, the finance ministry said.

Kim said the government will draw up a plan early next year to speed up the restructuring of the country's shipbuilding industry.

The local shipbuilding industry, once the backbone sector of Asia's fourth-largest economy, has been reeling from massive losses and a drop in new orders.

Hyundai Heavy Industries Co. and its smaller rivals have been conducting self-rescue measures to tide over a protracted industrywide slump. But slightly over half of the self-rehabilitation schemes have been implemented. 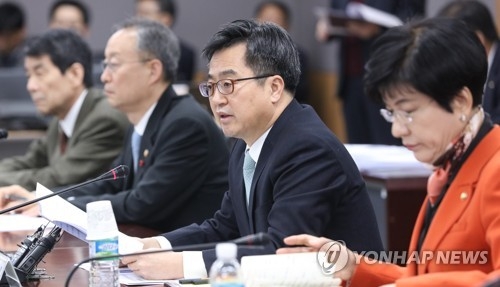