But it remains to be seen whether the North will accept his visit at a time when tensions have heightened over its nuclear and missile tests, they added.

"The IOC is believed to be in talks with North Korea over President Bach's possible trip to Pyongyang for consultations over the North's participation in the PyeongChang Olympics," a source said.

The IOC has said that it has invited North Korea to participate in the Winter Games, which will be held from Feb. 9-25 in South Korea and that it will offer support if necessary.

"If Bach's trip is realized, it can be a positive sign for North Korea's participation in the games," another source said. There is also the possibility that a lower-ranking IOC official may visit the North instead of Bach, the official added.

Lee Eugene, vice spokesperson at Seoul's unification ministry, told a press briefing that it has no information about Bach's potential visit.

The North missed an Oct. 30 deadline to confirm whether it would send its figure skating pairs team, but the doors are still open for North Korea, as the IOC may grant select North Korean athletes wild-card entries.

South Korea is also actively pushing for the North's participation as it believes that the move will help ease tensions on the Korean Peninsula.

"The government will consistently make efforts to make the PyeongChang Games a 'Peace Olympics,' including its support provision to the North," Lee said. "We will continue to maintain communications through various channels, including the games' organizer and the global skating body (over the North's participation)."

Some experts expect that the North may accept Bach's visit, given that it invited a senior U.N. official at the height of tensions sparked by its recent long-range missile test.

"A visit by a sports official would not be burdensome for North Korea," said Kim Yong-hyun, a professor at Dongguk University. He said the North probably hopes to break the current stalemate at a time when Washington is sending strong rhetoric against the North. 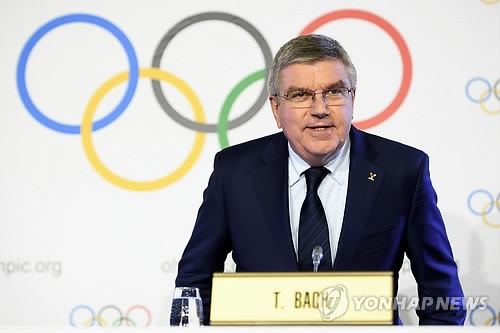